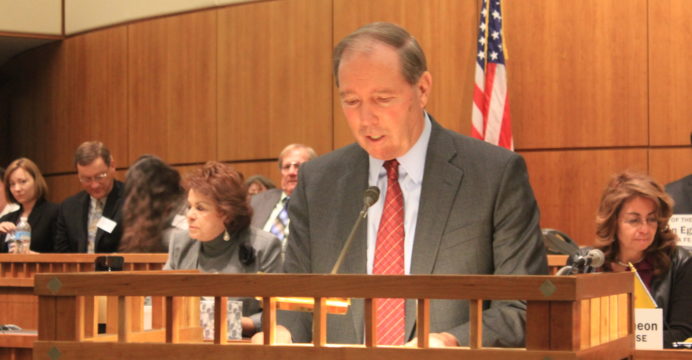 Update to a story filed Thursday regarding a letter sent by twenty-nine Democratic US Senators to President Trump seeking to reverse the new administrations plan to cut agricultural and rural economic development funding by $231 billion. (Click here for link to original story.)

The Candle had reached out to both of New Mexico’s senators, and in addition to the response from Senator Martin Heinrich, we are pleased to update our reporting with this statement from Senator Tom Udall:

“I am completely opposed to the unprecedented cuts to USDA, including rural development, included in the president’s budget, cuts that would cancel programs that create jobs and support small businesses, Main Street revitalization, and water projects throughout rural New Mexico. As a member of the Agriculture Appropriations Subcommittee – where funding levels will ultimately be determined – I will fight tirelessly to ensure that these unacceptable cuts never become reality. Given the devastating nature of these cuts to rural development and other crucial programs, I am hopeful that a bipartisan coalition will come together to reject this short-sighted USDA budget proposal. I also plan to press President Trump’s Agriculture Secretary, Sonny Perdue, about these outrageous proposed cuts when he testifies before the Appropriations Committee in the coming weeks.” — U.S. Senator Tom Udall

Jennifer Talhelm, the communications director for New Mexico’s senior senator, wrote in an email that, “Senator Udall is fully supportive of the points in the letter you forwarded from a number of Senate Democrats to President Trump. But given that the letter was written and sent after President Trump’s terrible budget proposal was submitted to Congress, Senator Udall is focusing his efforts on defeating these cuts during the appropriations process and ensuring New Mexico’s rural communities get the funding they need.”

Talhelm also pointed to efforts by Udall “to ensure New Mexico’s farmers, ranchers and rural communities have the resources they need, including funding for water infrastructure, agriculture research, and economic development. He has long been a champion for extending broadband internet and phone to rural communities, including Tribal lands, and for water projects throughout rural New Mexico.”

Udall was instrumental in “securing strong funding for rural business development, full funding for PILT and Water and Waste Water disposal loans and grants, and increasing funding for USDA’s National Resource Conservation Service conservation and agriculture research.” (This was also referred to in the article regarding Senator Heinrich’s response to The Candle’s inquiries – click here for link to that story.)

Below is a list of press releases forwarded by Senator Udall’s office further describing some of the efforts he has made to further rural economic development (click on each headline to be linked to press release):

[Editor’s note: When The Candle reached out to both Senators Udall and Heinrich, our email to Udall’s office in Washington bounced back to us. We followed up seeking another email address and did re-send the inquiry. Apparently that did not get through either, and we are grateful to the staff at Senator Heinrich’s office for coordinating with Senator Udall’s staff, and especially to Ms. Talhelm in Senator Udall’s office for making sure The Candle received his response. The Candle is sorry for any delay in the communication which may have been a result of an error on our part.]