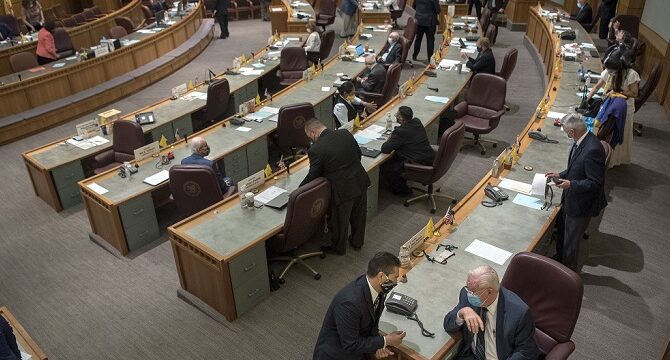 The House could prevent unnecessary evictions. Where there’s a will, there is a way.

Part Two – Will House members have the will to force the Governor’s hand and the Senate back into the Special Session, to provide relief for thousands of New Mexico’s residential renters?

Legislators like to pat themselves on the back for doing their job.

The Senate spent a lot of time doing just that the other night – hours congratulating a group of senators, most of whom had been rejected by the voters just days earlier.

And then they skipped town before the job was done.

They took care of matters important to businesses. Which was important, and predictable.

Then they walked away from helping the thousands of people in the state who have seen varying degrees of their income disappear, forcing some to expect an eviction notice when the Governor lifts her COVID -19 emergency orders.

The House still has measures before it, including HB 13 (as described in The Candle article published earlier today) which would help renters, and could be amended to help small inventory landlords.

Filed by House members Angelica Rubio, Andrea Romero and Daymon Ely, HB 13 seeks to protect thousands of renters from the unfairness of eviction proceedings they could find themselves in through no fault of their own.

But the Senate leadership seems to care less about these folks.

Today the House is faced with a choice – be the House of the People or the Senate’s lackey.

They can let their hands be tied by Senate leaders or stay in session a few more day and pass bills that their members want.

If they have the will, then they would force the Senate to come back later in the week – due to a provision in the state constitution.

There is important work to do – like dealing with some type of rental relief for tenants and small inventory landlords who are facing a showdown that is a result of the COVID-19 crisis.

But apparently these folks don’t have the pull bigger businesses have with the legislature and the governor, because so far only three legislators have stepped up to fight for them.

Well last week, before they skipped town, and in the late hours of the senate debate about the “Small Business Recovery Act of 2020” senator Clemente Sanchez, a self-described champion of New Mexico businesses, provided a fourteen-page amendment making a significant change in the unemployment compensation contribution requirements of New Mexico businesses.

Senator Sanchez said it was important to business, so the Senate adopted it, even though there was no specific reference to it in the governor’s proclamation message.

Having a plan to deal with preventing people from eviction and giving them twelve months to get caught up on their rent is also important to the businesses of the state of New Mexico.

It would also be good for legislators and the governor to consider a plan to assist landlords that have a small inventory of housing units, by developing some type of bridge loan program to deal with their expenses until tenants could catch up.

Larger real estate businesses which have rental units may qualify under the SB 3, the “Small Business Recovery Act of 2020” but it is really sketchy whether individuals or businesses with just a few units would be able to get the loans without changes in SB 3, or the governor amending her message to include HB 13.

Well, The Candle has pulled together a first draft of an amendment to SB 3 which the House could take up if any member chose to be brave enough and challenge the leadership to get something done to help renters.

The amendment contains the language contained in HB 13.

It also makes an attempt to add in a provision to allow small inventory landlords (including those with maybe an apartment in their house they rent to help with their mortgage) to be eligible for the “Small Business Recovery Act of 2020” just like all the other businesses.

The draft is certainly a draft … but the House has plenty of lawyers who are members, not to mention the hand full of lawyers working in the building. So, any deficiencies in this proposal, could be remedied if they take the effort to care and act.

If the governor and legislators already have a plan in place to help the New Mexicans who would be facing possible evictions through no fault of their own, then they should make it known.

Otherwise they should stay in session until it gets done.

Click here for a link to the draft proposed amendment.

As the old saying goes …

Where there is the will, there is a way.