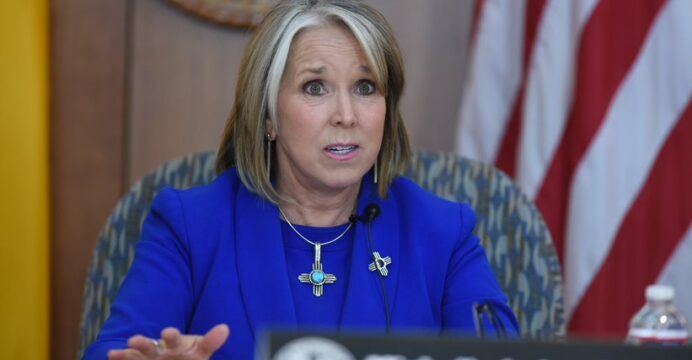 “My position on sexual harassment is clear: it is totally unacceptable and will not be tolerated by me or in my administration,”

Gubernatorial candidate Lujan Grisham’s statement was published in the Albuquerque Journal and other news outlets, along with her demand that a state senator remove himself from the race for Lt. governor that year because of “claims he harassed women as a city of Albuquerque supervisor.”

However, after steering state government for more than two years, the Lujan Grisham administration seems to be abandoning the promise not to tolerate such behavior.

Kenneth Owens, a government attorney who has referred to himself as “Mr. Smooth” and who was accused of harassment of women employees prior to resigning his job in 2015 as an assistant attorney general, returned to state service in the last year of the Susana Martinez administration.

Despite Candidate Lujan Grisham’s claims of zero tolerance of the type of behavior Owens has previously been accused of, Governor Lujan Grisham’s administration gave him a double promotion and huge pay raise in the Spring of this year.

Owens’ promotions were granted while passing over more qualified and experienced women lawyers for the two positions he now holds.

The promotions also put him in charge of major operations in an agency where about 75% of the employees are women.

The double promotion provides him with a yearly pay increase of approximately $24,000 despite the Lujan Grisham administration’s recent freeze on such pay increases.

(We will detail the convoluted trail of his pay increase in part two of this three-part story.)

“Mr. Smooth” slips back into favor.

Owens, a former assistant attorney general hired when Gary King served as the state’s top law enforcement officer, was accused in a civil lawsuit of harassing women employees of a non-profit for which he had oversight responsibilities.

Owens’ employment was abruptly ended under Gary King’s successor, AG Hector Balderas, about a month after the lawsuit was filed on June 22, 2015.

“Those documents in the State Personnel Office’s possession responsive to your request and not exempted by law are attached. Please be advised that the term “Termination” on an employee’s electronic SHARE record is a general coding term which can mean many things. You will note the stated reason here is “Resignation.””

The Candle acquired a copy of the lawsuit and related documents.

The non-profit organization alleges Owens to have “pursued an inappropriate relationship with at least one employee of USBC. With regard to this housing counselor, he undertook the following actions:

In addition, the lawsuit accused Owens of “conducting himself in a way that adversely impacted female employees of USBC and other service providers. In one particular instance, the HPP outreach coordinator was threatened by Owens, felt intimidated by Owens, and when she reported his conduct to USBC (and when USBC reported this conduct to the Office of the Attorney General), her contract was terminated.”

It appears that most, if not all, of the untoward actions alleged in the lawsuit occurred prior to January 2015, and before Balderas assumed the position of Attorney General.

According to court documents, Balderas’ administration settled the lawsuit about two years after it was filed.

There is no mention in the settlement documents about the resolution of Owens’ alleged behavior, although the AG’s original answer to the complaint states it “lacks sufficient knowledge to either admit or deny the allegations that Mr. Owens invited an employee of USBC for drinks, gave that employee a cell phone, or contacted that employee via the social networking website Facebook, and otherwise the allegations contained in Paragraph 66.”

In addition, the AG’s answer to the complaint states it “lacks sufficient knowledge to either admit or deny the allegation that an HPP outreach coordinator “felt intimidated” by Mr. Owens, and other wise denies the allegations contained in Paragraph 67.”

None of the responses provided in the answer to the complaint provided a stirring defense of Owens, or his alleged bullying or harassing behavior.

It should also be noted (according to the SPO provided documents) that Owens had resigned as of July 23, 2015, just four days prior to the AG’s answer to the complaint.

The settlement document contains the following language: “The Parties shall not initiate any statements to the news media regarding this stipulation or this action.”

When The Candle contacted attorney Ely (who is currently a member of the New Mexico House of Representatives), he responded that the settlement agreement and his client’s directives prevented him from commenting on the settled lawsuit and its allegations.

Owens, according to his resume which The Candle received from SPO in a response to an Inspection of Public Documents Request (IPRA), seems to have started his own law practice after resigning from the AG’s office.

The resume also indicates he worked in private practice until being hired back into state service at the WCA in March of 2018, the final year of Susana Martinez’s eight years as governor of New Mexico.

The Candle reached out to Owens in August and again in September, through several phone messages and two emails, seeking an opportunity to interview him for this story, and to provide him an opportunity “to go on the record with your own account of circumstances and reasons regarding your dual promotion between March of 2020 and July of 2020, as well as allegations about your performance during your tenure at the attorney general’s office, and your subsequent termination of employment.”

Owens never returned our calls, nor responded to our emails.

After several emails and leaving phone messages to WCA communications officials, including senior staff and Loretta Lopez, Director of WCA, the only statement WCA has offered is the following from Director Lopez:

“In my discretion as Director, I have hired Kenneth Owens as acting Deputy Director and on a short term basis he is being paid a temporary salary increase (TSI) to assist in that position.  I am aware that you have also been given this information by the State Personnel Office.  We have no further comment.”

The WCA Custodian of Records has recently (partially) responded, to an extensive IPRA request made by The Candle in August, explaining it may take up to October 16, 2020, for them to respond in full.

Other sources have provided us with significant information regarding Mr. Owens’ performance and the pathway to his promotions which will be addressed in an upcoming “Part Two” of this three part story.

We also sent emails on August 14, 2020, and September 8, 2020 to Governor Michelle Lujan Grisham’s communications staff seeking a response to the following questions about vetting Owens’ promotions by the Lujan Grisham administration:

We only hear crickets from the Governor’s staff regarding this matter.

Late yesterday, after reviewing the recently received initial information from WCA to our IPRA, we noticed an email sent by Owens to Director Lopez on May 4, 2020 reflecting on a meeting that seems to have occurred between Owens and the governor’s senior staff.

The Candle wrote to Teresa Casados and Matthew Garcia (chief of staff and general counsel), asking did they, “the governor, or any others on the governor’s staff review his previous employment history, including the allegations made regarding his performance as an employee of former Attorney General Gary King’s office, and as detailed in a lawsuit filed in 2015, just days before he was separated from that position in the AG’s office?”

Look for the next part to this story in a few days.