Hanna Skandera developed a grading system for New Mexico schools, but the results of her reform, and her spending spree, deserve a one letter grade of their own: “F” for frivolous.

As New Mexico’s Secretary of Education, Hanna Skandera controlled the purse-strings and policy for the state’s education of children during the past six and a half years.

For months, The Candle requested via public disclosure laws, and reviewed, thousands of pages of documents, which expose a Public Education Department (PED) spending spree of millions of dollars on out-of-state contractors, hotels, banquets, conferences, travel, and insider deals on consulting, while rewarding friends and sycophants of the Skandera cadre.

But first, some context.

Upon her arrival in 2011, she announced, “For years, New Mexico schools have ranked among the worst in the nation, failing our students. Now it’s time to take bold efforts to ensure our children receive a quality education that will prepare them to succeed in college and the workforce.”

Promising policy that would deliver significant results, she came with her “Kids First, New Mexico Wins” campaign. It focused on:

Then she declared war on anyone, especially teacher unions, that dare question her.

For six years she battled and spent her way into showdowns and lawsuits, branded schools with scarlet scoring, announced fake success, then claimed victory as she quit, while New Mexico schools sank to lower rankings nationwide, dropping from 32nd to 48th place (from a “C” to a “D”) in Ed Week’s ratings of 2011 and 2017  – certainly not the legacy Governor Susana Martinez and many others had expected.

Laying the groundwork for the scheme –

Within six months of her arrival, Skandera announced that she and her team of consultants had re-designed the structure of PED, making a request of the State Personnel Office to implement a reduction of the workforce.

Among those dismissed: a former teacher who was also the president of one of the two largest state employees’ unions.

(In an upcoming story, The Candle will report on the loss of millions of dollars available to school districts across New Mexico under a federal program – collateral damage from the elimination of the position the union president held along with that of another employee; positions previously created to assist smaller school systems applying for federal funds, that were readily available with the proper submission.)

Then, just three weeks after the lay-off announcement, as reporter Hailey Heinz wrote in the Albuquerque Journal, “Against the backdrop of 33 layoffs and a 24 percent budget cut to her department, Secretary of Education-designate Hanna Skandera is quietly building her leadership team — some of them from outside New Mexico.”

Skandera defended her decisions in hiring some out of state personnel stating, “I’ve said this about policy, we want to bring the expertise we need,” according to the Heinz article.

Over the following six years, at least five members of Skandera’s new team,

became key figures in various schemes that stretched the boundaries of the state’s procurement process: some as beneficiaries, some as enablers, and some as both.

There are also other PED employees, contractors, and Skandera policy cheerleaders who benefited financially through a scheme stretching the limits of a regional (and mostly rural) procurement program –  an otherwise good concept .

The state legislature enabled local schools to coordinate procurement and save resources through the creation of regional education cooperatives (REC’s), allowing them to “provide fiscal administration, technical assistance, and direct services to participating member school districts and state-operated schools…”

According to the office of the state auditor, the PED has a supervisory role in overseeing the operations of REC’s – PED is supposed to provide the guidance and oversight of REC operations, including the procurement processes used.

For years REC’s provided some services on behalf of the PED to schools particularly in rural jurisdictions where they could save money, and be more effective sharing some services and personnel or contractors.

But sometime after the legislature killed two of Skandera’s prime initiatives in the Spring of 2012 – third grade retention and revamping the teacher evaluation system – PED decided to start farming out much of the contracting the PED would use for teacher evaluation through the Ruidoso area Region 9 Education Cooperative (REC 9).

While there are nine REC’s in the state, REC 9, has received the lion’s share of contracts from PED since Skandera took over.

In fact, REC 9, has seen a dramatic and steady rise in the amount of money filtered through their offices from PED:

And much of the increased spending has been approved by Skandera’s administration without any bidding involved.

Here’s how the scheme works –

IGA’s can be undertaken with no bid process – the assumption being that two or more government agencies would work together on behalf of the public in providing the best return on investment of the resources they are entrusted with.

The deal here though, is PED is essentially the big dog.

And this big dog not only tells REC 9 what they will do in return for the money PED pays, but PED also dictates to REC 9 in certain cases which entity to develop contracts with for the services.

Sometimes the orders are tucked away in the language of the IGA, specifically stating:

“1) develop and execute contractual agreement with Southern Regional Education Board (SREB) to provide, at the direction of PED, regional training support for school administrators and leaders on the teacher evaluation tools, domains and implementation…”

(The SREB contract referred to above was for $438,360.00; SREB has received millions via language like this – but more on SREB in another installment in this series.)

And on other occasions, the orders come in a friendly email like this one from Matt Montano, the PED Director of Educator Quality, writing to a PED business operation specialist and a key manager for SREB, while copying the REC 9:

“I would like to start the amendment to the IGA with RECIX. I am increasing the contract by the amount below. This will be to supplement the contract with SREB and their subcontract with CSUN. All we need to do is amend the RECIX IGA and Kim and Ivy can work together on their end.

“This is the amount that we moved to get the CSUN contract moving. We need to increase the contract with Julia Rosa with this.”

Keep in mind, PED has oversight of REC’s, and should be insuring the REC’s are doing the public right in the contracting process – not enabling the side-stepping of a bid process, and taking care of former PED staff that helped design and implement the project.

For the record: The Candle has sent multiple emails for more than a month to PED officials, including the new acting Secretary Christopher Ruszkowski, asking this basic question:

“Why did NM PED contract, via Intergovernmental Agreements IGA’s, with Region 9 Education Cooperative (REC 9) and direct REC 9 to contract with entities NM PED could have contracted with directly?”

No one from PED will respond.

So, what does REC 9 get for their role in this scheme?

For being the middle-man, REC bumps up the cost of the services between 6.6% and 8% – not a bad deal for keeping it below the radar.

But a raw deal for the students of New Mexico, as these additional, unnecessary  administrative costs are conservatively in the range of $2 million.

Again, they are paid this fee for something PED does every day on other contracts.

So much for a Smarter Return on New Mexico’s Investment and Real Accountability.

All contracts issued by the state over $60,000.00, are required to go out to bid, unless they qualify for the sole source process.

Sole source contracts are typically issued in emergency situations, or when there is no other contracting entity interested or able to provide the services sought.

Sole source contracts for state agencies are also required to be posted on the state’s Sunshine Portal in the interest of transparency.

REC sole source contracts may be listed on the state’s Sunshine Portal, but apparently are only required to be posted on the website of the REC (if they have one) for thirty days … then whoosh, they are gone.

REC 9, has issued multiple sole source contracts since it became the “middle-man” for PED, but to date only five have showed up on the state’s Sunshine Portal, and only for this year and last year.

If one looks at the sole source section of the Sunshine Portal you will find pages of listings of contracts, going back several years – contracts of other agencies being handled properly.

The PED/REC 9 scheme, while seemingly legal, allowed significant spending to slip under the radar of many who were interested in the teacher evaluation program development and spending and that of other federally and state funded PED initiatives.

In upcoming segments of this series on the PED and REC 9 scheme, The Candle will report on: 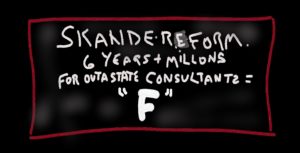 Earlier Reporting in this PED series: