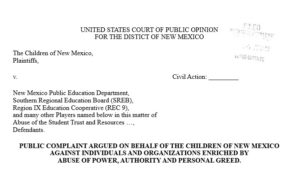 (Editorial note: While the format of this series is that of a faux court filing, the facts are nonetheless the facts. Much about New Mexico’s flirtation with school reform over the last six years has not been closely monitored, particularly regarding who are the real beneficiaries of millions of dollars spent under the radar – the children of the state or the contractors and insiders of a complex financing scheme used to benefit cheerleaders of a controversial movement and leader? It’s time that former Education Secretary Hanna Skandera’s Reform gets its day in the Court of Public Opinion.  Judge for yourself.)

1. During the summer of 2011, Hanna Skandera, Secretary-designate of the New Mexico Public Education Department (PED), appointed a new leadership team to advance a controversial reform plan for which she coined the phrase “Kids First, New Mexico Wins.” Just two weeks earlier she had fired over thirty career employees, including the president of one of the two largest state employees unions in New Mexico.  Skandera was on a roll, and anyone in her way needed to stand down.

2. Pete Goldschmidt, a professor and so-called school and educator evaluation-numbers guru from the California University system, became director of Assessment and Accountability – hired on at a salary of $104,999/year.

3. Skandera promoted Julia Rosa Emslie to the newly created position of Director of Strategic Initiatives, providing her with a salary of $75,000/year. According to colleagues interviewed by The Candle, Emslie was tripping over her own feet to please her new boss – a perfect candidate for a token in-house promotion by Skandera to stem legislators’ criticism about hiring so many outside experts.

4. Emslie’s promotion made her a key player and promoter of Skandera’s controversial agenda.

5. Matthew Montano, a Bernalillo High School principal was recruited to be a Division Director for PED paying him $92,999/year.

6. In his new position for the PED, Montano operated like a young Michael Corleone, and over the next six years established himself as the ‘godfather’ at PED, providing protection and rewards to favored colleagues – some inside PED, and some on the outside.

7. Within two weeks of the new fiscal year, in July of 2011, Skandera’s team added two other key players to her reform effort – organizations which would provide former PED employees, and well-connected sycophants of Skandera, lucrative contracts, many which never went out to bid.

8. The first organization engaged by the Skandera team was the Ruidoso based Region 9 Education Cooperative.

9. Because the cooperative was a legislatively established governmental agency, PED could farm out some of the contracting for its controversial teacher and school evaluation plan through REC 9, and took license in side-stepping parts of the procurement process which would have more clearly identified the contractors it directed REC 9 to hire. (Click here for an earlier story from The Candle which describes the “IGA” (inter-governmental agreement) issuance process engaged by PED and REC 9, – scroll down to the section that is entitled: “Here’s how the scheme works.”)

10. The second player that was added to the PED spending scheme was the Southern Regional Education Board (SREB).

11. SREB is a so-called not for profit organization which has focused on school issues for 16-member states in the American South. New Mexico is not one of the sixteen states, but had used SREB in the past for a comparatively small amount of work.

12. Under Skandera that was about to change.

13. Skandera, prior to landing her gig as Governor Susana Martinez’s education czarina, held a senior education position in the Jeb Bush administration in Florida. During that time, she would have been very familiar with SREB officials.

15. From that moment on, SREB was ‘off to the races’ garnering millions in contracts between FY 2012 through the end of FY 2017 – and SREB used much of its new-found money to hire or contract well-connected PED folks as they left state employment for greener pastures in the private education consulting business.

16. As will be illustrated later in this story, Pete Goldschmidt, Julia Rosa Emslie, Matthew Montano, and others at PED, played significant roles in the SREB contracting – with some work eventually going to at least two of them, along with other co-workers at PED.

17. (The Candle made an Inspection of Public Records Act request this week for copies of new IGA’s issued between PED and REC, and which were entered into since July 1, 2017. According to limited information on the Sunshine Portal, REC 9 has already been authorized by PED to spend over $4 million in the new fiscal year – much of that likely going to SREB – and if past practices are an example for the future, the PED/REC 9 IGA’s will exceed $10 million as they add more contracts and amend the existing agreements.)

18. The Candle has been able to identify many who stuck their fingers in Skandera’s school reform pie, pulling out some plum compensation deals.

19. We reached out to recipients of lucrative contracts via phone messages, text messages, emails, and voicemail, asking to interview them, and offered the opportunity to provide their explanation for what seems to be a conspiracy to avoid procurement rules, and participation in what could be considered conflict of interest schemes.

[Correction: Steve Broome, of SREB, did return a call in early July. While he spoke generally, advocating his belief the work SREB did was important (his defense will be reported on as part of a story on the  assessment of the PED school reform agenda), he never made good on answering a series of questions emailed to him later in July regarding, among other things, the rates SREB charged, and the relationship between SREB and PED officials who later became SREB sub-contractors on REC 9 contracts with SREB for PED work. All other requests of SREB officials for information have gone unanswered. Later in this series, The Candle will publish the scores of questions asked of SREB, REC 9, PED, and subcontractors – none answered.]

Coercing a Coop to Become a ‘Cash Cow.’

21. REC 9 (the Region 9 Education Cooperative), like all New Mexico regional education cooperatives, is governed by a coordinating council – the superintendents of schools for Capitan, Carrizozo, Cloudcroft, Corona, Ruidoso, Hondo, and Tularosa districts and communities.

22.  The operations and practices of REC’s are overseen by the PED according to state law. Another significant dynamic in this relationship: superintendents of schools are also licensed and judged by PED. In other words, REC 9,  and its coordinating council, are essentially submissive to the ‘big dog’ in this relationship – PED.

23.  So when PED comes to REC 9, and asks that the regional group act as a fiscal agent for PED, and offers them an 8% ‘indirect’ fee to conduct the business of creating and administering contracts, REC 9 is prob

ably not going to question the directions it gets from the ‘big dog.’

25. And much of the increased spending has been approved by Skandera’s administration without any bidding involved.

26. In most of the IGA’s between the two government entities, PED instructs REC 9 as to which subcontractors to do business with.

27. Not only does REC 9, NOT ask any questions about being told who to contract with, Kim King of the REC 9, Special Projects – Fiscal Team, wrote in an email to a superintendent of schools in September of 2015, that “It is my understanding in talking with our auditor, that if the NMPED designates a specific contractor to perform a service as part of our IGA, we are not obligated to go out for bid or RFP.”

28. When The Candle contacted REC 9 with questions and IPRA’s seeking the name and contact information of the auditor referred to by Ms. King, REC 9 came up short – to date we have not received even the name of the auditor.

29. (For the record, The Candle does not believe the auditor referred to by Ms. King was anyone in the office of Tim Keller, the State Auditor, as he has stated there will be an expansion of the annual audit of REC 9 due to questions about procurement and possible conflict of interest.)

Sharing Scarce Resources, or Sucking Them Up?

31. On the “About SREB” webpage for the Southern Regional Education Board, it states: “The Southern Regional Education Board works with states to improve public education at every level … We help policymakers make informed decisions by providing independent, accurate data and recommendations … And we help policymakers, institutions and educators share scarce resources to accomplish more together than they could alone.”

32. SREB also states in the next paragraph on that webpage that it “is a nonprofit, nonpartisan organization headquartered in Atlanta.” 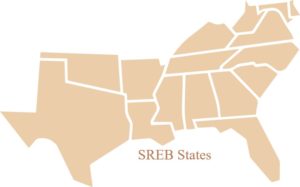 33. Since at least August 2012, SREB has routinely charged a rate of $2,200/day for each of their staff members or sub-contractors for much of the consultation and observation work.

35. SREB also adds on another 10% charge for everything they bill for. As with REC 9, it is referenced as an “indirect” charge, which seems to simply be a mark-up.

36. Mark-ups are something businesses are accustomed to in the private sector and usually represent part of the profit from the sale of their service or product – not a charge one would expect from a nonprofit.

37. SREB also engages services for New Mexico PED projects from other sub-contractors, for which it then also adds on the 10% indirect charge.

(Editor’s note: It starts to get a little wonky here for a few paragraphs, so maybe if it’s that time of day, get a glass of wine, a cocktail, or a cup of coffee … the narrative gets more interesting, we promise … just a few important numbers for context?)

38. These mark-ups (or as they label it, “SREB 10% Indirect”), add considerably to the income received by SREB from PED directing other subcontracts through the SREB contract. For instance, a sampling of SREB invoices in two quarters in two different fiscal years reveals:

The actual invoice for services for all SREB contracting for that three-month period (and the SREB Total 10% Indirect fee):

The actual invoice for services for all SREB contracting for that three-month period (and the SREB Total 10% Indirect fee):

39. So much for the SREB claim of helping “policymakers, institutions and educators share scarce resources to accomplish more together than they could alone.”

40. And when these “Indirect” fees are added to the bottom line of SREB work, that still does not represent all the additional costs to PED for the subcontracting, as REC 9 then adds their 8% “Indirect” fee onto the billing.

41. The Candle has sent numerous emails, texts, and left voicemails, to PED officials over six weeks, asking what justifies all of these added costs to the already high daily fees SREB charges. PED remains tight-lipped.

42. Even the new acting Secretary of Education, Christopher Ruszkowski, has chosen to be silent. In an email, The Candle sent to Mr. Ruszkowski almost two weeks ago, we asked:

“Why did NM PED contract, via Intergovernmental Agreements IGA’s, with

entities NM PED could have contracted with directly?”

43. No response from the acting Secretary, nor anyone amongst his highly paid staff. So much for his, and his predecessor’s, claims about “accountability” and “return on investment.”

NOTE: The Candle had planned on publishing the next installment of in this series today (Sunday, August 20, 201), however we received some additional information from one of our sources which we are incorporating in our report. We apologize for the delay, but expect to have it up early Monday morning.

The next installment on this series will acquaint readers with other ‘Parties’ in the matter of Skandera Reform, In the Court of Public Opinion.

They are former PED officials, and employees and consultants of other PED connected state institutions, who have been handsomely compensated since leaving state government, through subcontracts for PED work on projects they were involved with creating and administering.

Individuals like, Donna ‘Lexi’ Miles, Matthew Goodlaw, Alia Congdon, Linda Paul, Becca Ferguson, Drew Dooley … more on Pete Goldschmidt, Matt Montano, and Julia Rosa Emslie … and a scheme using an institute at the UNM College of Education to bump up the costs of consultants to PED, and engineered by PED insiders.