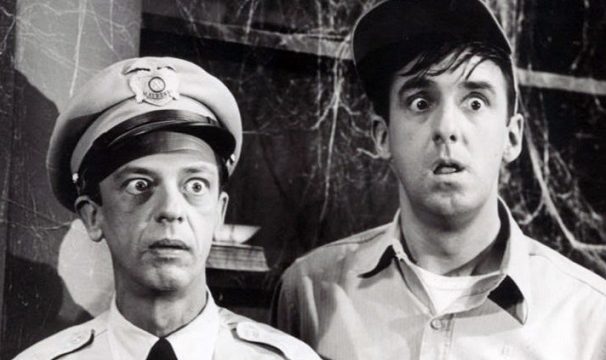 Governor Martinez vetoed the Democrats’ proposals on the budget and revenue.

And, in feigned disbelief, Democratic leaders are doing their best Gomer Pyle impressions!

The Governor has never deviated from her meritless pledge of no tax increases, so instead of acting surprised and behaving peevishly, House and Senate Democrats need to wake up and do something.

For leaders to fail to recognize that she would not change (absent a serious battle – with the Dems offering bold alternatives), shows how out of touch they are – look at the chart at the end of this article for a handful of the many news reports since last summer regarding the Governor’s stance.

Yes, those whose politics are left of center, understand her corporate welfare policies and her support of unregulated and under-levied development continue to prevent many New Mexicans from attaining a prosperous future.

But the Democrats’ failure to mount a serious attack against this conquest by corporate and political Gordon Gekkos, is also a key cause of children and families starving from lack of hope, and for the advancement of statewide economic death.

Too many Democrats of the House and Senate reside in a bubble that protects them personally, but does nothing for the people they profess to represent and care for: working families, students, immigrants, teachers, state employees, the disabled, and the elderly.

In 2015 and 2016, the Democrats in New Mexico raised approximately $6 million to mount a campaign to take back the House and increase their numbers in the Senate.

They promised bold and new ideas and approaches to get the state back on is fiscal feet again … they would lead where the Governor and her Republican House had failed.

But what happened between election day November 2016, and the day they delivered a budget to the Governor in March 2017?

They claim they passed a budget that protects people. (They also insist they passed major measures fostering economic growth – The Candle will publish a story on “major measures” next week.)

Maybe the legislature’s budget is a bit better than the governor’s proposal. But it still cuts education and spending for the state’s most vulnerable. And it falls way short of seriously creating sufficient revenue to make bold changes.

As The Candle reported on April 3, 2017 (click here for The Candle story): “the budget [the legislatures’ version] actually cut education spending by about $37.3 million compared to what the legislature and governor approved in the 2016 regular session budget making for fiscal year 2017…”

“Seems like the Democrats are bolder when they are out of power, and running for office, than they are when they actually attain the power,” commented a disappointed staff member of a labor union recently (who asked not to be identified, because his boss might be upset seeing him criticize the Democrats).

The budget proposed by the legislature sacrificed many basic elements the Democrats campaigned for: making sure the “one per-centers” actually, and adequately, pay for government services; increase alcohol and cigarette revenues; close loopholes and other corporate welfare (which the Democrats help create in 2013), to name a few.

It is not like the Democrats did not hear from advocates begging for bold action.

Suggestions like this from a report by KUNM’s Gwyneth Doland published on Feb 2, 2017 (click here for  link to KUNM story):

“But the dilemma is not so cut and dry according to Carter Bundy, the head of a public employees’ union.

““You don’t have to choose between cuts and raising taxes,” he says. “The first thing you do is you close the loopholes. The second thing you do is you adjust some of our flat taxes—things like gasoline, alcohol, cigarettes, they have not been adjusted for years—making sure you don’t lose value due to inflation.”” – KUNM – New Mexicans Wary Of Both Budget Cuts And Tax Increases, By Gwyneth Doland, Feb 2, 2017.

But while the governor kept saying NO to taxes, the Democrats huffed and puffed … and, cowered to special interests.

Democrats in the House and Senate were responsible for killing cigarette and alcohol tax increases which would have produced close to $240 million in new revenue. (Click here to see The Candle story on the Big Tobacco winning the day over students and schools.)

And, Speaker of the House, Democrat Brian Egolf (D – Santa Fe), effectively killed a bill which would have created a new upper income bracket for increased revenue, by placing it on ‘the Speakers Table’ – a move which prevented the House from voting on the bill.

Their budget fell flat … actually it was worse than flat, despite their claims they had saved the day.

Their revenue package came up way short of the promise they held out when running for office.

In the end, Democrats responded as though throwing a few “Hail Mary’s” was good enough to start passing the donation basket.

As was also reported in The Candle this week:

“Just 26 hours and 31 minutes after the close of that disappointing 2017 legislative session, the Speaker sent out an email asking for more campaign money to help him to keep his speakership intact for more than two years, dubiously suggesting:

“the House and Senate sent a budget and revenue package to the Governor that reflects our core values of protecting education, investing in families and communities, and ensuring that out-of-state corporations pay their fair share…”

Wringing of hands, sending out emails, pointing fingers, asking for more contributions to pay political consultants, just ain’t a plan for change, though.

None of those campaign tricks address the core needs and values of working families. 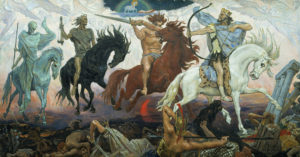 New Mexico: The Armageddon of America’s Political and Fiscal Apocalypse?

New Mexico is on the cusp of becoming the Armageddon of a modern fiscal Apocalypse – as ever worsening economic events take place and the response of leaders on both sides of the political aisle is basic finger-pointing, and feeble policy maneuvers.