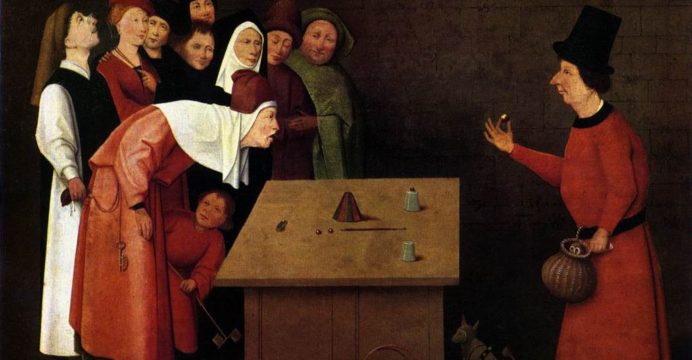 Look closely at the numbers on education spending … they don’t lie, although some legislators would provide an ‘alternative’ view.

[The Candle has looked closely at the legislation that passed and failed during the session that ended two weeks ago, as well as the final budget and revenue package the Democratic leadership keeps spinning as examples of their commitment to progressive core values. Tomorrow The Candle will look at the revenue package, and later this week an analysis of various legislative measures will be rolled out.]

For today the focus is on the budget for public school support.

Despite failing to protect education spending House Speaker Brian Egolf (D-Santa Fe) has set out creating his own alternative facts about the state budget he helped craft.

Just 26 hours and 31 minutes after the close of that disappointing 2017 legislative session, the Speaker sent out an email asking for more campaign money to help him to keep his speakership intact for more than two years, dubiously suggesting:

“the House and Senate sent a budget and revenue package to the Governor that reflects our core values of protecting education, investing in families and communities, and ensuring that out-of-state corporations pay their fair share…”

Well the budget actually cut education spending by about $37.3 million compared to what the legislature and governor approved in the 2016 regular session budget making for fiscal year 2017 (see chart below).

The disingenuous claims that Democratic leaders protected education by adding $5.49 million more in FY 2018, than the (eventually cut) FY 2017 budget for public schools, and failing to mention that the original budget for FY 2017 called for $37.3 million more than is in the new budget, is a slight of hand Kellyanne Conway might consider adding to her quiver of alternatives.

(The numbers in the above chart are taken from documents produced by the New Mexico Legislative staff, and can be seen by clicking on links at the end of this story, and information received from the Legislative Education Study Committee. *An earlier version of this story did not contain the information relative to the use of $25 million from capital outlay authorization to be spent for certain transportation and educational materials. )

And while claiming to hold corporations accountable in paying their fair share, the new Democratic leadership (that created the revenue package) protected “big tobacco’ and the alcoholic beverage industry, including giant out-of-state corporations like some of those operating under the umbrella of the Altria Group: Philip Morris USA, U.S. Smokeless Tobacco Co., John Middleton, Nat Sherman, Ste. Michelle Wine Estates, Nu Mark.

One of the Altria Groups operations, Altria Client Services, LLC, gave more than $153,000 in campaign contributions between August and October of 2016.

As The Candle reported on March 23, 2017 (click here for link to that story), a tobacco tax increase which “was sponsored by Senator Howie Morales (D-Silver City) … would have generated about $89 million in new revenue for New Mexico schools.”

However, “…Big Tobacco got it killed with the votes of all the Republicans and two influential Democrats sitting on the House Taxation and Revenue Committee.”

That execution occurred while the Speaker and his Majority Whip, also members of the committee, looked on.

[For the record both the Speaker and his Whip, Representative Doreen Gallegos (D-Las Cruces) personally voted against the procedural motion which killed the bill – but it appears they were powerless to keep their other two Democratic leaders in line with commitments to protect education by providing more dollars to offset the millions cut by the legislature in October and January. Oh, and on a side note: not that it makes any difference as they will assert, but the husband of the House Majority Whip is listed on the New Mexico Secretary of State’s website as a lobbyist for, hold it … yes, Altria Client Services, LLC – the Big Tobacco guys’ guys.]

Everyone knows the state has gone through some tough times, due to falling revenue from oil and gas, along with failed government leadership in economic and job development.

But according to numerous fundraising pleas made by Egolf and his campaign machine in the last election cycle, that was all going to change with the Democrats taking over the House and increasing their membership in the Senate.

And yet they want the very folks they let down to pony up more money for their campaign consultants.

Seems like they need budget consultants … or maybe they should turn over the money they raise for campaigns to offset the cuts they helped make to education and other services families need.