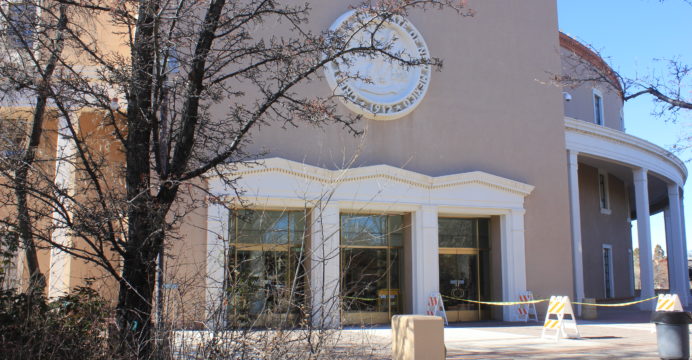 Tuesday, March 7, 2017 – Dummy Bills are making an appearance at the Roundhouse.

Dummy Bills are making an appearance at the Roundhouse.

Yeah The Candle has been a bit critical of the legislature’s slow pace this year, however we are not making an editorial comment about the intellectual capabilities of the members of the House and Senate when we use the phrase ‘dummy bills.’

Typically a dummy bills are place-holders, and filed on the last day that bills can be filed (that was back in mid-February).

They tend to be restricted and distributed in a limited number to chairs of committees and leadership members of both parties.

When they are filed they all have high numbers and the same title, which reads:

AN ACT RELATING TO THE PUBLIC PEACE, HEALTH, SAFETY AND WELFARE.

And until the legislator actually gets it before a committee it is generally blank – stating nothing but “BE IT ENACTED BY THE LEGISLATURE OF THE STATE OF NEW MEXICO:”

Maybe the lack of content is where the phrase ‘dummy bill’ comes from.

In any case, they are important to watch out for, as there is usually little time to respond to them if one finds a subject contained in the finally released language that is a problem.

Several have appeared in the last few days, with two of them (HB 575 and HB 539) before the House Appropriations and Finance Committee this afternoon. (Click on the numbers and you will be taken to a page on the legislative website for each bill. Maybe by the time you do that, there will be language posted, or at least a summary of the intent in the Fiscal Impact Report (FIR) for the bill.

There are a few other interesting things happening – or not – today.

First of all the House still has the Early Childhood Education Constitutional Amendment (HJR 1) on the calendar for third reading.

(As The Candle has written recently, this measure seems to be floundering despite promises from leaders this would be a priority. Maybe the Democrats will get their members in line and get it done today.)

There is also an important hospital care bill entitled The Patient Safe Staffing Act (HB 288) on the House calendar.

And then there is HB 201, which would create a new top income tax bracket.

The Senate Finance Committee reportedly is getting closer to releasing its version of a state budget for FY 2018, and is meeting this afternoon with the Dr. Barbara Damron, the Secretary of Higher Education – apparently more “cuts” discussion.

And the House Agriculture and Water Resources Committee will be holding a discussion about the acquifer mapping program at NM Tech.