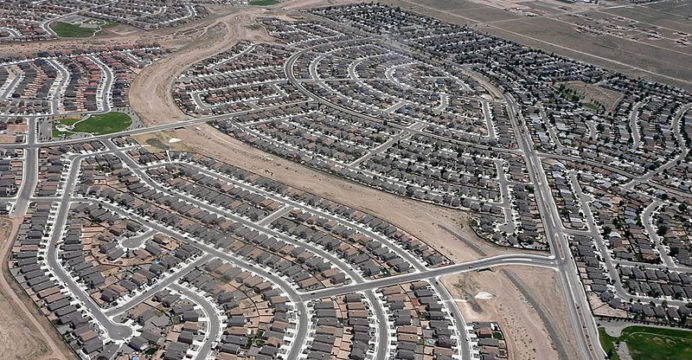 Photo by Bradly Salazar, taken while on a balloon ride over Rio Rancho, New Mexico in 2009.
HomeCurrent News
Mar 6, 2017 by Bruce Wetherbee -

Bill attempts to limit TIDD use, to prevent Santolina-like sprawl.

A bill before the New Mexico House would limit the use of certain tax subsidies available to large development companies to redevelopment projects.

It is designed to help folks from being forced to “sell the family farm, as well as prevent the loss of smaller farms and communities with hundreds of years of rich cultural traditions,” as described by one South Valley advocate.

Two Albuquerque House Democrats, Representatives Andres Romero and Patricio Ruiloba, filed HB 489 in an attempt to give communities a fighting chance to ensure tax incentives for economic and home development are used for their intended purpose: fulfill the growth plans of the community, not the financial portfolios of investors and large scale development enterprises.

The measure would prevent Tax Increment Development Districts (TIDD) from being used for supporting the financing so-called ‘greenfield area’ projects.

Greenfield areas are defined in the bill as areas:

(1)  consisting of land, the majority of which has not been previously developed and is not currently served by municipal or county public infrastructure adequate to serve the potential project development; or

Just over a year ago, WALH submitted a TIDD application for the almost 14,000 acre Santolina master plan.

WALH stated in a press release issued when it submitted the subsidy application that, “the establishment of the Santolina PIDs and TIDDs will offer Bernalillo County a much-needed economic development tool to compete with other states and jurisdictions which utilize municipal financing to attract high quality employers, jobs and residential master plans (the place jobs sleep at night).”

But South Valley residents do not believe the promises.

They worry the Santolina plan, and the use of TIDD’s for financing leverage, will eventually facilitate a loss of the “cultural identity” of small communities which have survived for several centuries.

“People will be forced to sell the family farm,” while international real estate operations reap millions in tax breaks, according to one proponent of Romero’s and Ruiloba’s bill.

The SouthWest Organizing Project (SWOP), a local group established over thirty-five years ago to “direct grassroots organizing campaigns to make social or political change ..,” sent out an email to their base asking them to contact legislators with a message of support for HB 489, as well as for a related bill, HB 468, sponsored by Romero and colleagues, Representatives Patricia Roybal Caballero and Christine Trujillo (both also representing Albuquerque).

HB 468 calls for the election of the board of directors for the Albuquerque-Bernalillo County Water Utility Authority (ABCWUA).

SWOP writes in their email that the ABCWUA “has traditionally been a way for developers to consolidate their power in resource decisions, and has been incredibly unhelpful during the Santolina process. If you believe that the people of our county deserve more of a say in how our resources are used, we hope you will support this bill.”

This story will be updated tomorrow.

(The Candle will soon publish an investigative report on a potentially related development project of the Augustin Plans Ranch, LLC (APR). The APR project proposes to pump and pipe “54,000 Acre Feet of water every year” north some 150 miles to the Albuquerque/Rio Rancho area.)