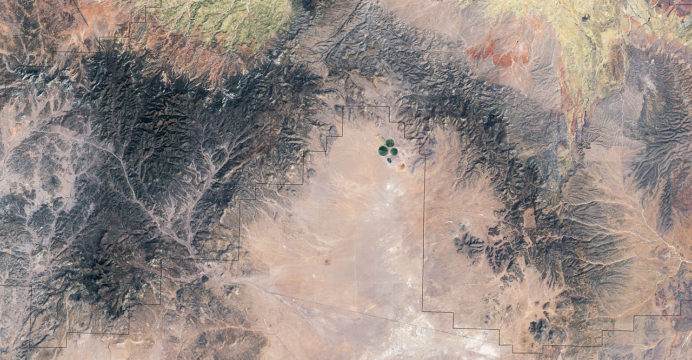 Like a shot out of a water cannon, the controversial Augustin Plains Ranch (APR) proposal to pipe water 140 miles north to greater Albuquerque, made the list of the first 50 projects being advanced by the new Trump administration for public-private infrastructure partnerships.

According to a story written by Lynn Horsley, Steve Vockrodt, Walker Orenstein and Lindsay Wise of The Kansas City Star and McClatchy Washington Bureau,

“President Donald Trump’s team has compiled a list of about 50 infrastructure projects nationwide, totaling at least $137.5 billion, as the new White House tries to determine its investment priorities, according to documents obtained by McClatchy’s Kansas City Star and The News Tribune.”

APR is believed to be owned by an international group, and sits on the Plains of San Augustin in central-western New Mexico, above an aquifer about fifty miles long and a width varying between five and fifteen miles.

APR has an application before the New Mexico State Engineer seeking “to develop an eco-friendly water reclamation and transport project that will pump 54,000 acre-feet of water out of the aquifer every year and pipe it to New Mexico communities,” according to the company’s website.

The Very Large Array (a radio astronomy observatory) is a relative neighbor to the project and also sits above the aquifer.

In their exclusive story, The Kansas City Star and McClatchy Washington Bureau continues:

“The preliminary list, provided to the National Governor’s Association by the Trump transition team, offers a first glimpse at which projects around the country might get funding if Trump follows through on his campaign promise to renew America’s crumbling highways, airports, dams and bridges. The governor’s association shared that list with state officials in December. The group told the officials the projects on that list were “already being vetted.”

This is a developing story. Look here for more information Thursday, January 26, 2017.

Click here for a link to a previous story in The Candle about the New Mexico State engineer suggesting the state may want to look at developing severance taxes for water mining projects such as APR’s.