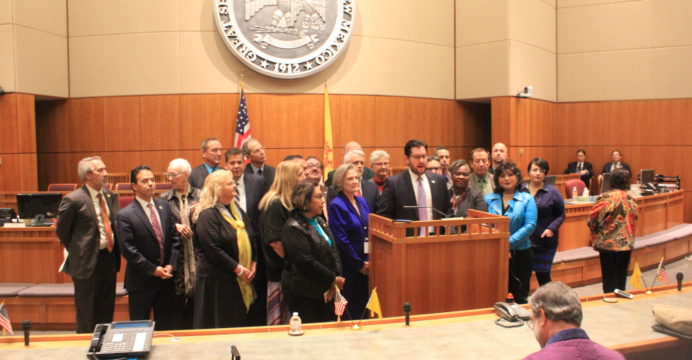 Not ready for prime time Democratic jobs and economic plan?

Much hullabaloo was made by Democratic staffers about House and Senate  plans to lift New Mexico from the depths of economic despair.

When debating the recent so-called “solvency’ bills to get the state out of its current deficit for the current FY 2017 budget year (which closes June 30, 2017), Democratic leaders insisted their second act, unveiling of an economic development and jobs creation plan, would be bold compared to the pathetic performance of the administration over the past six years.

As most New Mexicans need not be reminded, New Mexico has the second highest unemployment rate in the nation.

It ranks dead last or in the bottom few on government monitoring organizations’ lists for effective governance, protection of children, and highest on lists regarding the number of residents living in poverty or having poor education prospects … and poor job prospects.

So, when the Democrats showed up for their much-advertised press conference yesterday, most reporters expected something new, and certainly some details.

The Democrats were clear in articulating the problem. The script used was much like the claims on the campaign trail last fall.

“Today, families and young people in our state are confronted with poor prospects for getting a job.  Far too many residents are living in real economic distress, and anxious about the future for themselves and their children. Democrats in the Legislature will take action immediately to restore their hopes and dreams,” stated Senator Clemente Sanchez, the apparent chief economic designer for the Senate.

But when asked by a television news reporter how many jobs would be created if the six point package (see below) were to pass and get signed into law by Governor Martinez,  the twenty-four House and Senate members, all Democrats, kind of looked at each other for a few seconds, until House Speaker Brian Egolf finally stepped up to the microphone and said:

As to the details of the six-point plan, well there were few in writing, and even fewer offered in the Q and A with reporters after the statements of Speaker Egolf and  Senator Clemente Sanchez.

Here is all the detail offered (through the Senate Democrats’ web-site):

Capital outlay Infrastructure – Infrastructure projects create needed jobs in local communities starting right away, when done correctly. Democrats in the Senate and House intend to pass a $63 million package of spending projects for infrastructure repairs and improvements.  These projects will help stimulate the economy and create jobs in all parts of the state.

Minimum Wage Increase: New Mexico suffers with some of the lowest median wages in the country. Democrats in the Legislature intend to pass a modest pay raise above the current $7.50 state-wide minimum wage to help the state’s lowest-paid workers – in this session.  It’s long overdue, and families have waited long enough.

Broadband: Democratic majorities in each chambers (sic) will pass legislation to significantly increase broadband access across New Mexico. Investments in broadband infrastructure can have real impact on jobs and business growth, especially in rural communities. Expanding access to broadband technology is a proven method to encourage job growth.

Industrial Hemp Research: Democrats will pass legislation to lay the foundation for hemp industrialization in the state, and ample jobs. New Mexico has a unique competitive advantage for growing industrial hemp, a low water crop that is perfect for the arid climate of the state.  It has multiple commercial uses, and will create important rural jobs.

LEDA: Democrats plan to reform the way state Local Economic Development dollars are distributed, to make them work better for communities in our state.  The intended legislation will assist existing, home-grown small businesses better access funds in order to grow and prosper.

Now that’s a lot of real estate in the wordsmithing world, but little substance. Here is a review of each of the parts of their plan, given what little they unveiled:

Capital outlay: a presentation that suggests a lot of new jobs because they plan on appropriating about $63 million for “infrastructure repairs and improvements.” But that figure is less of an appropriation than in previous years.

Minimum wage: Legislators claim they will pass a “modest pay raise above the current $7.50 state-wide minimum wage to help the state’s lowest-paid workers – in this session.  It’s long overdue, and families have waited long enough.” But the group did not identify which of the several bills they would support. And for those waiting for help “a modest pay raise” does not seem like the Democrats are living up to their promises to (let’s see one of the campaign fundraising email quotes here):

“I know I’ve said it before, and I’ll say it again:  New Mexico families deserve leadership that will fight for them, not the very wealthy and special interests.  It’s time to elect a Democratic majority in the state House that will work to build an economy that works for everyone.”

Broadband. Well there was a little bit of detail here. They claim the Democratic majorities in the branches of both the House and Senate will pass legislation “to significantly increase broadband access across New Mexico.”

It appears ‘significantly increase’ is kind of like ‘lot’s’ of something, if you are an elected official.

Industrial Hemp. Well this should be a slam dunk, because they passed a similar bill back when the Republicans controlled the House and had more Senate members, only to have the Governor veto it. But they never tried to over-ride the veto, so who knows what they’ll do this year.

LEDA – That is the Local Economic Development Act. They are going to reform that with intended legislation to “assist existing, home-grown small businesses (sic) better access funds in order to grow and prosper.”  But that is basically what the law already is supposed to do. Any new funds? No details.

Finally, when asked about any nexus between their economic development plan and any new revenue plan to fund their proposals, Speaker Egolf stated they were just beginning the budget process for the new fiscal year.

Again, pretty much nada on the details.

It became obvious to most people who attended the press conference that these members of the legislature were either not prepared to answer questions about how they would get from campaign rhetoric to policy making, or felt they didn’t need to, as the young man preparing their press conference abruptly ended it when reporters tried to ask more follow-up questions.

For the thousands of New Mexicans who entrusted their future to these leaders it was not encouraging.

But maybe they have a secret plan.

That seems to be what carries the day for President Trump.