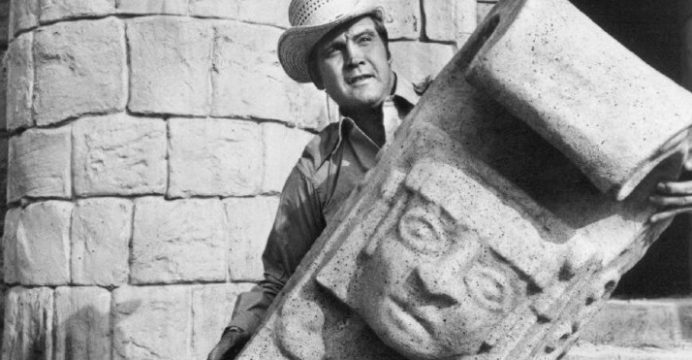 Six Million Dollar Man Steve Austin did some heavy lifting ... not so Speaker Egolf and his team.
HomeCurrent News
Mar 16, 2017 by Bruce Wetherbee -

That’s about the amount various progressive groups and their donors provided to Democratic candidates, their leadership campaign committees, independent expenditure groups and various other political action committees, to win back the New Mexico House of Representatives and increase the number of Democrats in the state Senate.

Unfortunately though, unlike Colonel Steve Austin (remember The Six Million Dollar Man), Speaker Brian Egolf (D-Santa Fe) cannot handle the heavy lift … he has failed to make the six million dollar investment in him and his buddies work for the people.

The promise from the leaders of the Democrats, particularly former Minority Leader Egolf and his fundraising machine NM House Dems (or New Mexico House Democratic Committee, NMHDCC, for short), was, well let’s quote them with a few excerpts from emails sent last fall:

“House Democrats are fighting for everyone – not just the powerful and well-connected.  That means rewarding hard work and helping to level the playing field, not rigging the system for the wealthy special interests.” – From email sent 11/1/2016 via: Brian Egolf <info@nmhdcc.com> via bounce.myngp.com

“New Mexicans know that with the right leadership, we can create an economy that works for everyone and level the playing field.  Together, we can ensure that every child will have access to a quality education regardless of zip code.” – From email sent 9/23/2016 via: Brian Egolf <info@nmhdcc.com> via bounce.myngp.com

“Yet again, it’s clear that Governor Martinez and House Republicans value the special interests more than ordinary New Mexico families … It’s time that we elect a Democratic majority that is going to fight for all New Mexicans, not just the very wealthy.” –  From email sent 9/16/2016 via: NM House Dems info@nmhdcc.com via bounce.myngp.com

Brian Egolf was elected Speaker of the House.

But the promise of change came up short.

Two nights ago HB 201, a bill to create a new top income tax bracket to help level the playing field and filed by Representative Daymon Ely (D-Corrales), was remanded by Speaker Egolf to “Business on the Speaker’s Table” which another member angrily told The Candle “means it’s dead.”

This isn’t the only matter the Speaker has sent along to die out of the reach and view of the public.

On the same night he sent Ely’s bill to a maximum security cell to protect those high income New Mexicans, he sent HB 288, The Patient Safe Staffing Act, to the House Appropriations and Finance Committee (HAFC) to avoid a vote on the floor which would have exposed some Democrats who have been telling the nurses they support the bill but quietly never want to vote on it because of the powerful hospital lobby.

HB 288, was filed by Representative Christine Trujillo (D-Albuquerque), and would require hospitals to staff according to the recommendations of actual bedside nurses to assure patients are getting the face time they need with their nurses while recovering from illnesses, injuries or surgery. (See editor’s note below.)

When The Candle asked the Speaker why he referred Trujillo’s bill to HAFC when he did not do so to the solar tax credit bill (which had a bigger impact on the state budget than did the nurses bill), Egolf responded “Christine asked me to.”

That is not what the nurses were told by Trujillo.

The sponsor and the nurses wanted a vote on the floor …  even if it meant the bill was defeated, because at least then, they would know who was being honest with them among the Democrats.

The Candle followed up with Representative Trujillo about the claim by the Speaker that she asked him to send it to HAFC.

She denied asking that he do it.

She told The Candle that legislators knew it would die in HAFC and the nurses would never get the vote to see who really was in support.

And then there are the efforts to open the election process and make it easier for people to register to vote. Killed by Democrats voting with Republicans in committee.

Another key bill to deal with economic development and job creation was also killed in committee by a Democrat voting with Republicans.

The failure by the House Democratic leadership to advance their promises into action, while reported here at The Candle over the last several weeks, has also been noticed by other media commentators such as Joe Monahan at his New Mexico Politics with Joe Monahan, and even nationally by Stephen Wolf at the Daily Kos, who wrote last week that “Democrats need to get their own house in order…”

The $6 million campaign effort to put the Democrats in control, and the failure for the Democratic leadership to rally its caucus and maintain discipline makes for a story line worthy enough for New Mexico television producers to develop …

Maybe the working title could be “The Six Million Dollar Sham.”

(Editor’s note: The reporter filing this story has, in previous years, provided research to nurses and other advocates of HB 288; therefore any perceived bias is duly noted.)