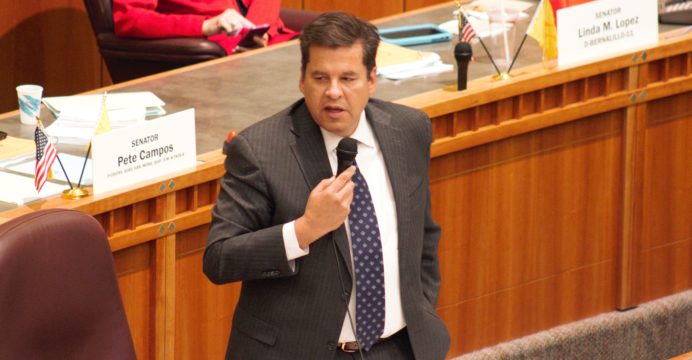 The clock is ticking away on sound job development.

Lots of smoke and mirrors.

Then Senator Joseph Cervantes delivered the Democrats’ response to the Governor’s speech.

While a definite contrast in assessment of where the state’s economy is, along with the quality of life of New Mexicans, it will be interesting to see where the Democrats seem to be going in economic development.

As Steve Terrell wrote this morning in the Santa Fe New Mexican:

“Cervantes said, “It’s time to stop bemoaning these falling oil and gas prices, and it’s time to take these things that are beyond our control and use the resources and tools that we have in hand and which are in our control.”

“He promised that Democrats in this session would offer “concrete solutions” for the economy. But he was not specific about what those plans would be.”

(Click here for a link to Steve’s entire story in the New Mexican.)

The Candle will be posting a story tomorrow morning* listing the initiatives already known or being discussed as part of the Democrats’ legislative directives on economic development, and an assessment of same.

One thing we will be following closely, will be how committed or stand-offish the Democrats will be to the idea of advancing so-called public-private partnerships – P-3’s.

We will be getting the comments of various members of both branches, with a special reach out to Senator Cervantes and the new Chair of the House Labor Committee, Representative Bill McCamely.

The devil will definitely be in the details.

[*EDITOR’S NOTE: Expected post referred to above regarding Democrats’ economic initiatives will be posted later in the day due to new information becoming available as day progresses. Posted 7:35 AM, Thursday, January 19, 2017.]