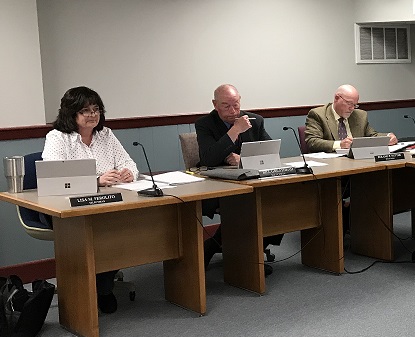 Pepperell Board of Selectmen, Lisa Ferolito, William Greathead, and Roland Nutter (L to R)
HomeCurrent News
May 23, 2018 by Bruce Wetherbee -

Pepperell, Massachusetts – UPDATE from Monday night meeting of the Pepperell Board of Selectmen (BOS) regarding the proposed gravel pit reclamation project on Nashua Road.

After a spirited discussion about a proposal from Mass Composting Group (MCG), to truck in 4 million yards of fill from construction sites in Massachusetts, Maine and New Hampshire, the BOS instructed town counsel Ned Richardson to contact the Massachusetts Department of Environmental Protection (DEP) to clarify whether any discussions about the proposal have begun with the state office that issues Administrative Consent Orders (ACO) for the filling of quarries, gravel and sand pits with foreign material.

During the meeting, Richardson made several references to there being no application or notice of intent to the building department, and that local zoning would not allow the project.

He contended nothing could happen until the proposal was formally submitted to the town via the building inspector’s office.

However, when pressed by a member of the BOS if the local zoning was enough to protect the town, Richardson stated, “I don’t know if there is anything that can supersede local zoning for this type of project.”

He added that “there are things that will supersede local zoning.”

The Candle made several calls to the state environmental department Tuesday, asking if there was any ACO application or other discussions with the state regarding the project.

“No applications for a soil reclamation project in Pepperell have been submitted to MassDEP and we have not discussed such a project with the town or the proponent.”

Although the state has not at this time received an application from MCG, nor discussed the matter with the group, the town of Pepperell received a letter in February from MCG’s consultant describing the scope of the project and asking for the town’s support.

The Nashua Road proposal, located on about 50 acres next to the Pepperell airport and adjacent to the Nashua river, would need an ACO from DEP, which has jurisdiction over:

as stated in DEP’s Interim Policy on the Re-Use of Soil for Large Reclamation Projects – Policy # COMM-15-01.

The purpose of the state policy is “to ensure the reuse of large volumes of soil for the reclamation of sand pits, gravel pits and quarries poses no significant risk of harm to health, safety, public welfare or the environment and would not create new releases or threats of releases of oil or hazardous materials …” according to that same document.

Andrews acknowledged to The Candle that he and town planner Steve Parker met with MCG partner David Burton on December 5, 2017 – two months before he received the letter from Peterson, asking the town for a letter of support for the project.

In his email to The Candle, Andrews wrote that Burton, “… discussed his “concept” for the potential development of the property. The Town Planner informed Mr. Burton that the use was not allowed by the town’s zoning by-law.  He was advised to see the Zoning Enforcement Officer.”

There is also a document The Candle reviewed and photographed at town hall offices indicating Andrews and Parker met with Burton and his consultants in February (at or about the same time Andrews received the letter asking for a letter of support).

Each of those meetings, and the letter from TERRA to Andrews, are among the tasks an applicant must demonstrate to DEP as having performed, before the state will issue an ACO.

The Candle sent emails to Peterson, Andrews and Parker asking if a letter of support was provided by the town, or if the request had been denied.

None of them would provide an answer to that question, and several other questions regarding their meetings and the letter.

Andrews did write in that he told the owner the project was a “non-starter (see two previous published in The Candle), and that the town planner claimed the project was not allowed by zoning.

BOS Chairman Roland Nutter stated at the Monday’s meeting that he had not been informed by Andrews of the meetings or the letter, until earlier this month.

Selectwoman Lisa Ferolito wrote The Candle that Andrews had never discussed the matter with her, and Selectman William Greathead, who was just recently elected, was informed by a resident of the town, and not by Andrews – nor by Parker.

Despite Andrew’s and Parker’s failure to notify the members of the BOS these past five months, Nutter and Richardson told people attending the meeting Monday night that to the best of their knowledge no letter of support was given for the project from anyone representing the town.

Many questions and concerns raised by those at the meeting echoed the words of resident Dave Lavender, who stated:

“What’s concerning a lot of people is that there has been some sort of process going on since at least December of last year, with somebody who represents the town having discussions with somebody about a big thing – a very big thing – 4 million cubic yards of dirt going into this town and the board of selectmen was not made aware.

Lavender continued, “Somebody should have made the board of selectmen aware that something was going on.”

Nashua road resident Margaret Scarsdale advocated for all communications the town administrator has had with the proponents of the project be made public.

“I’m disturbed on a couple of fronts,” Scarsdale stated.

She continued, “We have a town administrator who has held meetings, and who is being asked for a letter of support from [the town by] a company that has spent money.

“He works for us, and by all accounts we just gave him a 20% raise. So, I would like the board to ask him to put forward all of his communications that he has had regarding any meetings with this company, so that there is transparency,” Scarsdale requested.

Board of Selectmen To Consider New “Earth Filling” By-law

The Candle reached out to all three members of the BOS about the statement from DEP indicating no action has occurred yet at the state level, asking for a comment on what the BOS might do to make up for the five months they were left in the dark about the project.

Greathead responded that he was pleased that at this time at least the DEP had not started any process and said he would support having the town draft a by-law that dealt with protecting the community from large reclamation projects.

In addition, he stated, “I would support having the board of selectmen send a letter to the DEP asking we be notified immediately if and when anything on this proposal is discussed with the state, along with informing DEP of our deep concerns in allowing this type of project in Pepperell.”

Ferolito agreed the BOS needs to “make up for lost time” and notify the state about the devastating impact such a large project would have on area residents.

“I am also concerned that this type of operation will affect more people in town than just those living near the gravel reclamation site. Traffic, public safety and public health issues come to mind,” Ferolito stated. “We need to prepare a plan to deal with this, and the citizens who expressed their fears Monday evening should be included in the preparations.”

Chairman Nutter told The Candle in a phone interview he was very pleased the state had not received any contact from MCG or TERRA about the proposal to date, and wanted “the planning board to begin determining what needed to be added to the zoning by-laws to protect the town.”

“I believe our entire board agrees we need to send a letter to the state expressing our strong concerns about this type of project. We will also ask to be contacted immediately regarding any communication the state may get on this proposal,” added Nutter.