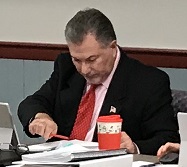 Pepperell, Massachusetts – The Candle has learned that Pepperell town administrator Mark Andrews has opted to finish out his stay as a town employee using vacation time.

According to information The Candle received, Andrews informed the board of selectmen (BOS) on Thursday that after the holiday weekend he will utilize vacation time to finish up his employment with the town.

His decision to use vacation time over the next several weeks, would leave the town selectmen to have to perform his duties until they fill the position.

Andrews, who has been the town administrator since 2014, first announced he would retire sometime this summer – he did so within days after a town election which shifted the balance of power on the board of selectmen, which oversees the work of town administrator.

In the last two elections, Lisa Ferolito and William Greathead prevailed. They both have expressed dissatisfaction with the way Andrews had handled his responsibilities.

Andrews called in sick this past Monday, when at a meeting of the BOS, a large group of residents complained of officials being left in the dark about a proposal to locate a gravel pit reclamation project on Nashua road near the Pepperell airport and adjacent to the Nashua river.

Residents expressed concern that Andrews had not informed the BOS of the project, which proposed the hauling of over 4 million yards of construction fill from several New England states over Pepperell’s roads and used to fill an old gravel pit near several residential developments.

At that same meeting, the BOS heard complaints from several key town employees of not having been properly and fairly included in the establishment of a new system of classifying employee positions.

It was expected that Andrews would fill out the fiscal year, which ends June 30, 2018, and retire shortly after.

The board of selectmen (BOS) recently appointed a search committee for a new town administrator.

This story will be updated later.