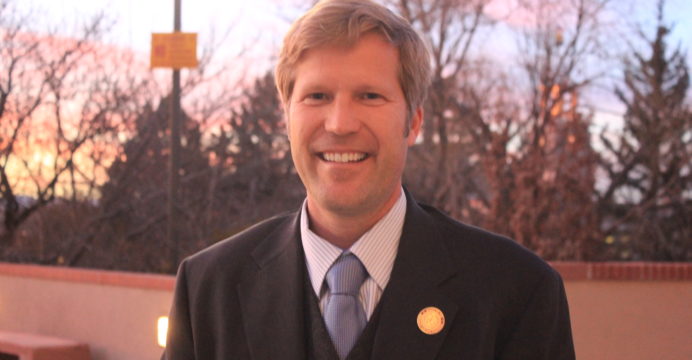 As if there were not already enough uncertainty about the FY 2018 New Mexico state budget – given the showdown between the governor and the legislature – another constitutionally independent agency has fired a shot across the bow of the ship of state.

According to State Auditor Tim Keller, “Without a signed budget and mechanisms in place to prevent deficit spending, our state may issue ‘hot checks’ with money we don’t have and jeopardize our bond rating. The legislature already clawed back over $900 million of unspent funds to help avoid deeper cuts to services and schools and has sent a budget to the Governor that is ready for signing.”

Given Auditor Keller is a Democrat one can be sure Governor Susana Martinez might consider this to be some piling on by the Democrats. 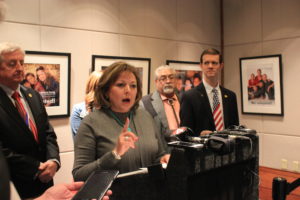 Governor Susana Martinez, explaining why she will call the New Mexico Legislature back into a special session to deal with the state budget.

As battle lines were more clearly drawn on Saturday by both branches of the government, she voiced concern at her press conference that the proposed budget from the legislature was not truly balanced.

Her chief of staff had suggested the same on Friday after the budget was finally sent to the executive, suggesting it was balanced “with a wink and a nod.”

When The Candle reached out to the administration for a response to the issues Keller raised, Chris Sanchez, her communications director, wrote back: “The Governor is very concerned about the state’s cash levels. As you know, she has already directed DFA to begin looking into a government shutdown — all because the Senate failed to do its job and pass a balanced budget.”

[The Candle has previously posited that for working families the so-called ‘flat’ budget as proposed by the Democrats in the House and a more bipartisan majority of Senate members, is fiscally deficient in spending for agencies which support families and working people. And it does not reflect “our core values of protecting education, investing in families and communities, and ensuring that out-of-state corporations pay their fair share…” as claimed by Speaker Brian Egolf in a fundraising email sent out one day after the disappointing session ended.]

But for progressives and advocates for working families, the budget offered by the administration also needs to come a long way to address problems facing so many New Mexicans.

Aside from the polarized positions on the budget held by the executive and the legislature, the statement from Keller does help to shine a light on legitimate concerns regarding solvency if a budget is not enacted before June 30, 2017, and if projected revenues run short again.

In a January letter to both the state treasurer and the secretary of finance and administration the auditor warned how state finances would need reconciliation with spending plans, should revenue estimates show signs of falling short in a given fiscal year.

Keller wrote at that time , “…During the current fiscal year, there was likely deficit spending prior to the effective date of the Legislature’s solvency measures. Because the special session solvency measures failed to gain the required votes to maintain an emergency clause, it is unlikely the state was in compliance with deficit spending restrictions at that time.  However, the FY17 audits will not be performed until after the end of the fiscal year.”

And in his press release the auditor recapped that he “put forth legislation during the recent legislative session carried by Senator Munoz (SB 133 and SB 242) and Representative Small (HB 293 and HB 294) that would have addressed the problem of the state spending money it does not have.”

However, like some other vital issues this year, each of those measures died before the session ended, despite this potent cautionary note from the legislature’s own staff in a fiscal impact report for those bills: “Without the proposed legislation, the state will continue to lack a process to ensure that it does not spend money it does not have, in particular in instances where shortfalls are due to unexpectedly low revenue. The State will be unable to identify deficits when there is a shortfall in a specific fund or agency. Adequate controls will not be in place to prevent unconstitutional deficit spending.”

The Candle also reached out to the Auditor’s office for further comment.

When asked if Keller would be supportive of re-introducing these bills in a special session likely to take place in the next several weeks given the Governor’s rejection of the legislature’s budget proposals, Keller stated through his spokesperson Justine Freeman, “Yes, it’s critical. Where we are now proves the need for those bills.”

In the balance of the statement from the administration, the Governor reiterated her concern for solvency of the state’s finances, as well as her differences with the legislature.

Sanchez wrote, “The Governor is very concerned about the state’s cash levels. As you know, she has already directed DFA to begin looking into a government shutdown — all because the Senate failed to do its job and pass a balanced budget.

“In addition, she will call a special session soon because the do-nothing Senate wasted 60 days debating things like holiday songs instead of working on a balanced budget that doesn’t raise taxes on our families.

“It’s important to note that the Governor and her administration offered $300 million in options to balance the budget – all while protecting classroom spending, and rejecting tax increases on our families and businesses. These included legislative retirement fund (among the most generous in the country) and lawmakers’ pet pork projects. Part of the governor’s solution also includes comprehensive tax reform that closes loopholes, broadens the base and reduces rates.”

And he wrapped up the state executive’s position with the following:

“Besides the budget, it’s not final what will be on the call, but there’s room for other items given that they squandered two months of work.”

When one considers that politics can be a contact sport (at least verbally), this repartee seems to offer some room to sort things out – let’s hope any compromise in the weeks ahead reflects the needs of so many hurting New Mexicans.