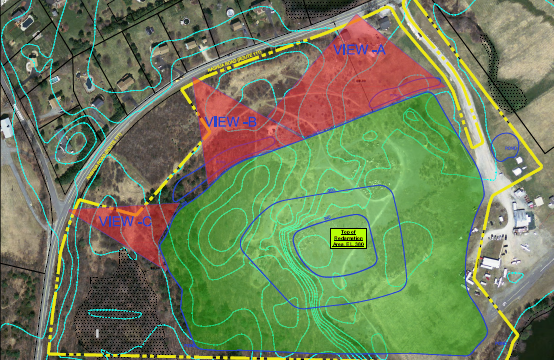 Pepperell, Massachusetts – In the most recent twist about a controversial gravel pit reclamation proposal, a group seeking to dump millions of cubic yards of soil from excavation and construction sites throughout New England has offered $1 million to the town of Pepperell – with a catch – the developer will pay, but only if the town plays by the developer’s rules.

Oh yeah, and there’s a deadline.

In a June 28, 2018 letter to the town of Pepperell, Philip M. Peterson, LSP of TERRA Environmental LLC (TERRA) – the project owner’s consultant – wrote that his client, Mass Composting Group, Inc. (MCGI), was making the offer “only if the Town provides support of MCGI’s proposal within a reasonable period (e.g., 30-45 days).”

(Click here for a link to the June 28, 2018, TERRA letter and related documents, recently sent to the town.)

The project is located at 161 Nashua Road – adjacent to the Nashua river, the Pepperell airport, three large residential neighborhoods, and about 3,000 feet from the Massachusetts-New Hampshire state line.

At meetings of the board of selectmen during May and June, and as recently as last week at the board of health meeting, residents expressed fear that the town has been left in the dark about the project by two town officials who met with the project’s owner and consultant late last year, and in February.

Residents were not reassured by admissions by members of the board of selectmen that their two employees had not informed the selectmen of the project for more than five months.

The “large volumes of excess soil from excavation and construction projects in Massachusetts, as well as qualified soils from Vermont, New Hampshire and Maine” referred to in Peterson’s letter, would likely require more than 50,000 trailer truckload trips … not including the return trips of the empty trucks.

Caroline Ahdab and other neighbors of the gravel pit, located at 161 Nashua Road, raised concerns about the plan’s impact on traffic, safety, noise, dust, the Nashua river, property values, and general quality of life.

In an emailed letter to the Pepperell boards of selectmen and health, and public safety officials, Ahdab identified “…various steps and actions to aide in protection of the Town and all Town Boards, the Town Residents, the Nashua River …”

Her letter provided a 19-point list of items the town should consider including in its efforts to address the gravel project’s application for an ACO.

(Click here for a link to a PDF of Ahdab’s letter to Pepperell’s officials.)

At a meeting of the BOS in June, resident Tony Beattie said he had spoken with Dave Burton (one of the owners of MCGI) and was told that some of the soil transported to the Nashua road pit might come from construction associated with extension of the MBTA Green Line.

And at the board of health (BOH) meeting last week, Beattie stated that in a conversation with Burton he was told that “the state came to Dave, asking him to take on this project.”

The Candle has begun to examine documents related to the Green Line Extension’s environmental studies.

The MBTA’s project, particularly around the multiple new station construction sites, was required to identify soil that might need removal due to years of exposure to hazardous materials.

“…identified the following Recognized Environmental Concerns (RECs) for the Site: 1) the presence of PCBs and arsenic in soil; 2) the historical use of the property and surrounding properties as a rail yard, 3) three, 30,000-gallon aboveground storage tanks (ASTs) reportedly used for the storage of 190-proof alcohol; 4) historical industrial property use; 5) a historical release (RTN 3-0974) and ongoing storage of diesel fuel (for emergency generators) at an abutting property; 6) use of an abutting property as a commuter rail vehicle maintenance facility and associated releases; and 7) nearby historical releases of 13,000 gallons of phosphorous trichloride (1980) and PCBs and petroleum (1993) both reported at the abutting rail road yard location known as “Yard 8”.

The Candle has requested from the MBTA information that might clarify if contaminated soil, treated or untreated, from any of the sites to be constructed for the Green Line Extension, would be headed to the Pepperell gravel pit reclamation project.

While Beattie’s information about the Green Line Extension being a source of soil trucked to Pepperell is not official in any manner, it is important to note that his information to date has been accurate.

To that point, he also informed the BOS at their June 25, 2018 meeting, that they would be receiving a proposal within days from Burton’s engineers.

That was after Chairman of the BOS, Roland Nutter, prematurely commented after receiving a report from the town counsel that the state had not received any paperwork for the project, “So we know that at least there is no clock ticking…”

Throughout May and June, Nutter and town counsel Ned Richardson, claimed there was no proposal before the town, and therefore the town had not been notified.

This, despite the fact TERRA had not only met with town officials employed by the BOS but had also submitted an earlier version of the June 28, 2018 letter and documents.

Nutter’s insistence that the clock had not started ticking is seemingly refuted in TERRA’s latest letter, as Peterson writes:

Nutter and Richardson continue to miss the point that the state issues the permits for the type of project being proposed by MCGI.

It is the DEP, not the town, that issues a permit for an earth-fill operation as is being proposed.

According to the “Interim Policy on the Re-Use of Soil for Large Reclamation Projects – Policy # COMM-15-01” applicants for “any quarry, gravel pit, or sand pit reclamation project that receives, or plans to receive greater than 100,000 cubic yards of soil for the reclamation/filling of said quarry, gravel pit, or sand pit after August 28, 2015” are required to seek an administrative consent order (ACO) from DEP.

The process for obtaining an ACO requires the applicant to notify town officials and residents neighboring the proposed project.

MCGI ostensibly began that process when they submitted a letter to the previous town administrator and met with him and the town planner back in February, and maybe as early as December of last year.

There are surprises and contradictions in the recent letter.

For several weeks, area residents have been trying to get information about the talks held in December of 2017 and February of 2018 between project proponents and the two town officials – Mark Andrews and Steve Parker – both who have recently resigned their town jobs.

The meetings were finally acknowledged to have taken place by Andrews in his response to questions raised by newly elected selectman William Greathead.

Andrews wrote of his meetings with the owner and consultant from TERRA, “I made it very clear that this concept is a “non-starter” and would not be supported by the Town Administration.”

Andrews also claimed Parker told the owner the project was prohibited, when he wrote in an email to The Candle, “… please note that Mr. Burton, the property owner met with me and the Town Planner.  At the meeting on December 5, 2017, he discussed his “concept” for the potential development of the property. The Town Planner informed Mr. Burton that the use was not allowed by the town’s zoning by-law…”

But that is not the way TERRA’s latest letter describes at least one of the meetings.

“… As requested by the Town of Pepperell’s former Town Administrator and former Town Planner, a Soil Management Plan was prepared describing procedures to evaluate potential soil source sites; monitor and place soils as they are received; conduct inspections of the ongoing operations; and stabilize the Site after soils are received and before the long-term development plans are implemented. A copy of the Soil Management Plan has been included in Attachment C.”

Why would the very officials who told the owner that his project concept was a “non-starter” and “not allowed by the town’s zoning by-law,” then ask the owner to prepare a Soil management Plan as described above?

Both Andrews and Parker have avoided answering detailed questions about their meetings with the project’s owner and consultants.

And both men have not shown up for any board of selectmen meetings since early May.

In fact, they both were evasive in responding to Ahdab’s requests to review their communications and documents about the project, including emails.

Parker’s last day on the job was this past Friday – he’s gone.

Andrews is riding out the last two weeks of his employment using accrued leave or vacation time.

There has been no serious effort, despite requests from Ahdab and The Candle, to bring these two individuals before the BOS in an open meeting to account for what actually took place – what was really discussed – in the meetings they had with the proponents of the reclamation project.

While BOS Chair Nutter claims he is opposed to the project, he continues his defense of Andrews’ and Parker’s incomplete answers to questions about the project.

Nutter has yet to deal with the reality of the situation as described by his colleague, Lisa Ferolito, when she attended the last board of health meeting:

“We [the board of selectmen] found out accidentally that this was going on – It was done behind closed doors – between the former town administrator and the former town planner and the project’s owner and his consultants.”

Coming up in the next reports:

The Board of Health – Board Members tell residents they’re serious … then put off action until July 24.