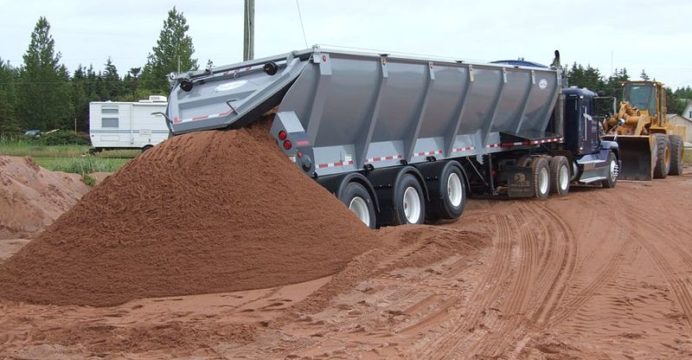 SPECIAL NOTE: See notice below for Board of Health Meeting TONIGHT about Gravel Pit Reclamation Proposal.

Pepperell, Massachusetts – A plan to truck in more than 50,000 truckloads of fill from construction sites around New England, has once again been submitted to Pepperell officials.

Pepperell resident Tony Beattie informed the board of selectmen (BOS) at their last meeting about a week ago, that the owner of the gravel pit lot told him the project’s professional team had sent another letter to the town describing his intentions to open a major fill operation – importing approximately 4 million yards of fill.

It appears that letter arrived on Monday.

This time the selectmen were immediately notified of the letter’s arrival by their newly appointed interim town administrator, John Moak.

Moak told The Candle he alerted the members of the BOS of the letter’s arrival, and once they had a chance to read it, he expected it would become available for the public.

And in February of this year, the owner’s consultant – TERRA Environmental, LLC (TERRA) – submitted a letter to Andrews requesting support for the proposal.

TERRA representatives and Burton also met with Andrews and Parker in February, according to records The Candle observed and photographed at town hall.

But according to selectmen, Andrews and Parker kept the board in the dark for five months.

The matter came to light in the Spring, when Nashua road area resident Caroline Ahdab tried to get information about the project from the town but was essentially stonewalled by Andrews and Parker about the details.

The two officials still refuse to discuss in detail or release their notes of what was discussed in two meetings they held with the owner and his consultants in December of 2017 and February of 2018.

Andrews and Parker have been conspicuously absent from any board of selectmen meetings since mid-May, despite calls from residents for an accounting of their meetings with the owners of the project.

Since Moak came on board about two weeks ago, communication from the town has been noticeably improved.

The Candle was told the proposed plan and letter (or similar documents) had also been presented to the Massachusetts Department of Environmental Protection (DEP).

It is the DEP, not the town, that issues a permit for a earth-fill operation as is being proposed.

According to the “Interim Policy on the Re-Use of Soil for Large Reclamation Projects – Policy # COMM-15-01” applicants for “any quarry, gravel pit, or sand pit reclamation project that receives, or plans to receive greater than 100,000 cubic yards of soil for the reclamation/filling of said quarry, gravel pit, or sand pit after August 28, 2015” are required to seek an administrative consent order (ACO) from DEP.

The process for obtaining an ACO requires the applicant to notify town officials and residents neighboring the proposed project.

The DEP regulations allow for stakeholders to have concerns addressed before any ACO is granted.

This process is potentially complicated. (Click here for link to the guidance Interim Policy issued by DEP.)

The more lead time town officials (including legal counsel) as well as neighbors and other concerned residents and organizations have to prepare is critical.

Ahdab and other neighbors of the gravel pit, located at 161 Nashua Road, have expressed concerns to the town officials relating to plan’s impact on traffic, safety, noise, dust, the Nashua river, property values, and general quality of life.

Today, in an emailed letter to the Pepperell boards of selectmen and health, and public safety officials (and copied to The Candle), Ahdab identified “…various steps and actions to aide in protection of the Town and all Town Boards, the Town Residents, the Nashua River …”

In her letter, she provided a 19-point list of items the town should consider including in its efforts to address the gravel project’s application for an ACO.

(Click here for a link to a PDF of Ahdab’s letter to Pepperell’s officials.)

NOTICE: The Pepperell board of health (BOH) is expected to discuss the matter at its meeting this evening (Tuesday, July 3, 2018). That meeting is being held at Town Hall, Conference Room A, between 6:00 PM and 8:00 PM. The town hall is located at 1 Main Street, Pepperell, Massachusetts.

BOH member Phil Durno has attended several of the board of selectmen meetings and indicated his board would be looking at this issue very seriously.

The boards of health of municipal governments in Massachusetts have broad latitude in creating regulations for the protection of the health of their residents.

Other Massachusetts communities, including the town of Ashby, have issued regulations regarding earth-fill operations.

Ashby’s BOH adopted a board of health by-law in August of 2017, regulating “major earth filling operations for the avoidance of nuisance conditions and the protection of public safety, welfare and human health, including the integrity of the natural resources, of the Town of Ashby.”