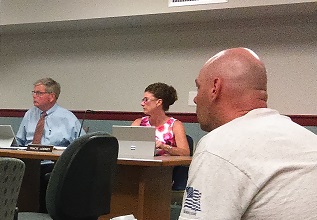 PEPPERELL, Massachusetts – The Board of Selectmen (BOS), and residents attending last evening’s meeting of the board, welcomed former Town Administrator John Moak back with applause and hope.

Moak served as town administrator from January 2010 until his retirement in 2014.

In a letter to department heads, Moak wrote, “It will be my objective to provide an atmosphere of respect, confidence, and accountability in local government.”

Moak, who has a reputation for responsiveness to the public, fairness towards employees and a commitment to transparency, will serve as an interim town administrator.

A committee appointed by the BOS will search for a permanent replacement for Mark Andrews who announced his retirement after the April town elections brought a change in the composition of the BOS.

Andrews, scheduled to retire in mid-July, and who is using vacation time to run out the clock on his tenure, was considered by many residents and town employees to be divisive and a minimalist when it came to transparency.

The BOS also approved a contract for Moak for about three months, which can be renewed for three months if the BOS has not appointed a permanent replacement for Andrews during the initial three months of the search.

There was an obvious sense of relief exuded by BOS members, as Moak read the letter he sent to the department heads, given the display of anger, frustration and disappointment from town residents over the last several months.

The arrival of Moak also helped to make good on a promise from the two most recently elected members of the board, Lisa Ferolito and William Greathead to change the way town hall was being run.

In the communication to the department heads, Moak continued, “I plan to work with the residents and businesses to identify the strengths and needs of the community through the citizens’ eyes … [and] to understand the strengths and needs of our local government. This task will lie heavily on each of you, examining your departments, the programs you have, the ones you want to implement and the challenges confronting you and the team.”

He also set up a timeline for implementing some basic goals to get the town in a good position when the BOS eventually hires a permanent town administrator.