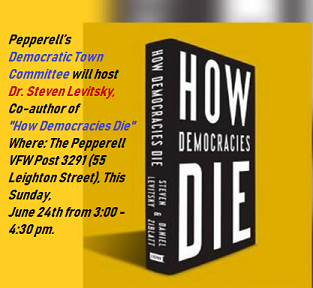 The event is free and all are welcome.

To register by clicking on:

Dr. Levitsky — and co-author Daniel Ziblatt — have spent more than twenty years studying the breakdown of democracies in Europe and Latin America and are now turning their focus on the United States.

The authors note that democracies are no longer dying through military coups and “violent seizures of power,” but are being undermined through the legal actions of elected officials, the courts, and the ballot box.

In other words, there aren’t unifying “red flags” — like soldiers on the streets or the suspension of elections — that mobilize citizens.

Instead, “[c]onstitutions and other nominally democratic institutions remain in place. People still vote. Elected autocrats maintain a veneer of democracy while eviscerating its substance.”

In the face of this — and even in a time of seemingly entrenched partisan divide — the authors offer a path to restoring vital political norms by emphasizing respecting foes as worthy opponents, and restoring power to “We, the people.”

The Lawrence Library in Pepperell will have extra copies of “How Democracies Die” available thanks to the generosity of Democratic Town Committee members.

This is the third in an on-going free series brought to the community by the Speakers Series Committee of the Pepperell Democratic Town Committee.

Without a Full Crew, MLG and Kenney Steer NMED Toward Failure – Despite New Methane and Ozone Regulation Policies

Without a Full Crew, MLG and Kenney Steer NMED Toward Failure – Despite New Methane and Ozone Regulation Policies