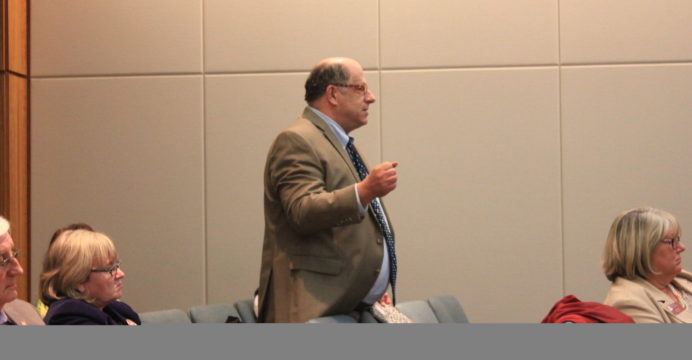 Nothing FOG-gy about stand of new Director of Foundation For Open Government.

“As FOG’s new director, I intend to advocate as fiercely for the principles embodied in the First Amendment, as does the NRA in defense of the Second Amendment,”

On Thursday evening the Senate Public Affairs committee heard testimony on a bill to limit the public’s access to records and names regarding the hiring of public employees, then unanimously voted to table the bill, handing a victory to advocates of public access to government information.

“As FOG’s new director, I intend to advocate as fiercely for the principles embodied in the First Amendment, as does the NRA in defense of the Second Amendment,” Peter St. Cyr, the new Director of the New Mexico Foundation For Open Government (FOG), told The Candle after helping to defeat a Senate Bill which would inhibit public access to records about hiring for government jobs.

St. Cyr maintained Senate Bill 93 was a slight to the public right to have access to information about the operations of their government.

“It’s in the public interest to have full disclosure. And in this case, we don’t need to go backwards and fix something that’s not broken,” stated St. Cyr in response to claims made by the bill’s sponsor, Senator George Munoz (D-Gallup), that the current law hinders public officials from getting a wide pool of applicants.

Munoz argued for secrecy of the names and information about applicants for public jobs, except for name and resume of the finalist for the head of any agency, state institution or political subdivision of the state.

St. Cyr, who has previously won awards for his investigative journalism, was joined by a heavy-weight from New Mexico’s political past in arguing against changing IPRA.

Jamie Koch, an original sponsor of the IPRA law when he was a legislator, argued the law worked fine and spoke about the dangers of opening the door for additional exceptions to the IPRA law.

Koch, who has also served as a Regent at the University of New Mexico (UNM), countered the arguments of former Governor Garrey Carruthers, and current president of New Mexico State University.

Carruthers argued that keeping names secret worked to protect applicants for a public job from their current employers finding out they were looking for another job.

Journalists were also represented in opposing the legislation when Brian Fantl, chief operating officer and senior vice president of The Albuquerque Journal, spoke of the role media has in exposing nepotism. 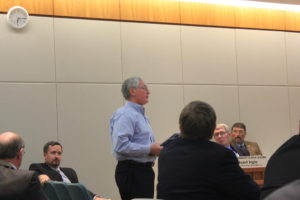 Fantl suggested the bill would make it easier for government officials to hire their ‘brother Daryl, and along with their other brother Daryl,’ in a reference to an old television sit-com.

According to information in the legislature’s fiscal impact report for Senate Bill 93, the New Mexico Attorney General, who is responsible for enforcing the provisions of the Inspection of Public Records Act, weighed in with this assessment of the bill:

“The AGO notes that as written, SB 93 exempts a public body from disclosing records that would reveal the identity of an applicant for public employment.  This covers every application for any position with the state or any of its political subdivisions.  However, only the resume and name identifying of the finalist of an agency head, state institution or political subdivision will be available on the public body’s website.  Therefore, as expressed by the AGO, public records relating to an application for every other position, except the “head” of a public body, would be permanently exempt from production.” 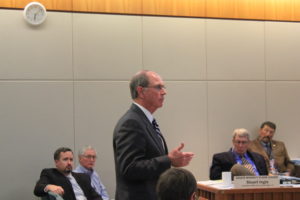 State Representative Jim Dines (R-Albuquerque), presented personal testimony about his role as an attorney fighting government officials who made decisions behind closed doors.

Dines has made it his work to defend public access to government records and meetings, and in the past served as legal counsel to the Albuquerque Journal.

The Albuquerque Republican explained he had discovered through litigation that similar arguments advanced by Munoz’s expert witness, attorney Nick Estes (previous legal counsel to UNM), about needing privacy to get better candidates to apply for important jobs, had no basis in fact; a point Dines asserted was supported in decisions from the district and appellate courts of New Mexico.

“For twenty years I have handled trials for open government, for transparency, and I have heard the same argument over and over about why things ought to be secret … but this (type) of information should be open,” commented Dines after the hearing, pointing out New Mexico has a statute “with a presumption of openness, and we should be very guarded against taking an exception.”

(The Albuquerque Journal published an editorial opposing SB 93, which Brian Fantl presented to members of the Senate Public Affairs Committee – click here for a link to the editorial. Note: originally it was announced that Senator Mary Kay Papen (D- Las Cruces) would file the bill; instead it was filed by Senator Munoz.)