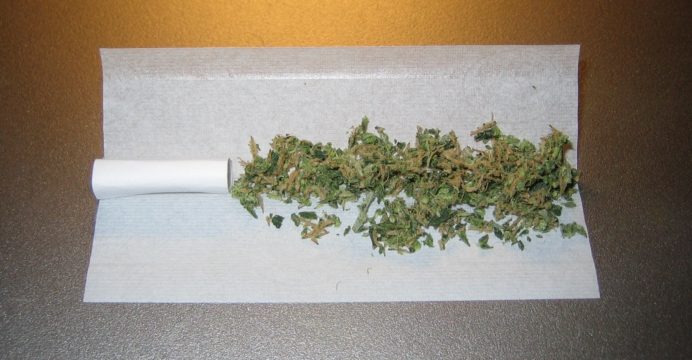 After a long Saturday afternoon hearing, attended by many from the public, the House Consumer and Public Affairs Committee moved controversial House Bill 89 – allowing for the recreational use of marijuana – along to the next committee assignment.

The “Cannabis Revenue and Freedom Act,” sponsored by Representatives Bill McCamley (D-Mesilla Park) and Javier Martinez (D-Albuquerque), would expand an existing board which regulates medical use of marijuana to take on the job of establishing regulations for implementation and the recreational use of marijuana in New Mexico.

Chairman Eliseo Lee Alcon had raised concern regarding a source of initial funding for the regulatory process necessary to implement the new program, to which sponsors explained there was an existing source of money going to the medical use program in the form of fees, which would be supplemented by new fees for commercial licenses for recreational use.

The chairman also seemed to be wrestling with the concept of making cannabis a legal substance for recreational use, and asked the sponsors if they would object to getting a ‘no recommendation’ report from the committee which would allow it to move through the legislative process to the House Business and Industries Committee “and there and then you can really have your battle?”

Rep. McCamley stated “We’d be fine with that. Our whole point is to move the process forward. If that makes you more comfortable we sure don’t object.”

The bill advanced with the ‘no recommendation’ on a 3-1 vote, with only opposition from conservative Republican Representative Robert Wooley, who questioned McCamley rather combatively about the bill.

Wooley claimed the sponsor was not answering his questions, when he did not get the response he apparently wanted. However it was obvious McCamley did provide answers that were on point to Wooley’s inquiries.

Throughout the exchange McCamley was gracious and respectful.

The bill is expected to have a lively debate should it reach the floor of the House for debate.

Earlier in the week another legislative committee heard from economist Kelly O’Donnell that passage of the McCamley/Martinez bill would likely create more than 11,000 new jobs.

In September 2016, the economist released a study she was commissioned to undertake by Ultra Health, “a turnkey solutions provider for the specialty healthcare cannabis industry” according to the company’s website; the Drug Policy Alliance and the Rio Grande Foundation also provided support for the study.

As stated in Dr. O’Donnell’s market analysis, (entitled Legalization of Cannabis for Social Use):

– See page 17, of the report which can be linked to by clicking here.

Members of the Senate Corporations and Transportation committee were advised by O’Donnell that the potential market for “social use cannabis in New Mexico, if a legal structure were in place and fully implemented, would be about $412 million in size.”

Over the next several weeks it is anticipated that there will be significant debate in both the House and Senate as lawmakers grapple over the problems of a failing economy, and the need to find alternative revenue vehicles to provide necessary services to New Mexico’s residents.

Look to The Candle for more on this issue and related subjects soon.