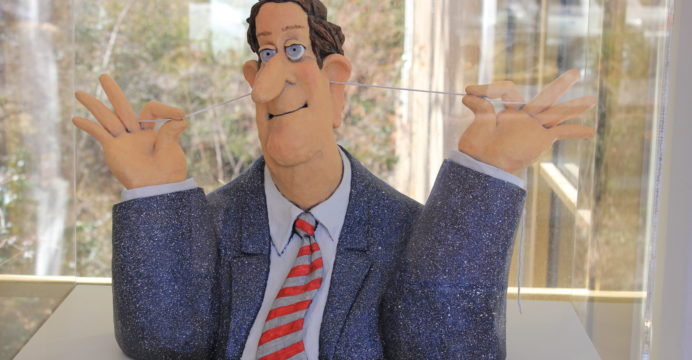 House Republicans piddling around while New Mexico slides deeper into the abyss.

Historians write that when Rome was burning, Nero fiddled.

Chroniclers of New Mexico’s early 21st Century’s decline due to rampant violence, lack of jobs, the failure to protect children, poor education, and more, will write how House Republicans piddled.

One only need look to the front page of a local newspaper to find any number of stories about economic decline and the failure of state government to respond.

Take for example Sunday’s Albuquerque Journal story by award winning investigative reporter Coleen Heild, entitled “Some troubled kids in NM have no place to go,” along with the other front-page story carrying the headline: “Exodus: NM’s population stagnant as people leave in unprecedented numbers.”

Both reveal the impact of poor governance. Which is why the response of House Republicans to legislative oversight of executive actions is disturbing.

On Friday, while offering protestations in defense of transparency, House Republicans unanimously voted against giving legislative staff sufficient monies to adequately prepare state budgets, research and investigate, and offer oversight of state agencies – agencies which happen to be under the control of their Party’s Governor.

[More on how those two Journal stories are related to actions of House Republicans later in this article.]

Let’s look at the piddling of some legislators first.

Most objective observers acknowledge that New Mexico is in dire straits.

Yet during extensive floor debate on Friday of a Senate Bill to provide necessary money for New Mexico Courts to stay open and deal with funding for some important services to the elderly, House Republicans railed against the new Democratic leadership because of a provision in the bill which would also increase the legislative budget.

Republicans lined up one by one to skewer the Democrats for having the audacity to make sure there was enough money available for staff and related expenses for the legislature to do its important work of not only meeting and passing laws and budgets but also to do the oversight of state agencies when it comes to determining if they are completing the work for which billions of dollars are appropriated.

The Democrats wanted to add money for the legislature to be able to adequately do their job.

But the Republicans objected, claiming Democrats were not willing to curb legislative spending as was being asked of schools and other state service agencies because of the budget crisis.

Eventually the measure passed much along a party line vote, but later that evening Governor Martinez vetoed the bill and continued the attack on the Democrats in her veto measure writing “At a time when some legislators are talking about raising taxes on hard-working families, it is unacceptable to have one branch of government refusing to share the responsibility of reducing government spending.”

That veto placed in question when and what the legislative staff will be paid. Pay day was supposed to be tomorrow – Monday.

The outrage expressed by the Governor and the House Republicans appeared a bit over the top even for them, given nine of the sixteen Senate Republicans voted in favor of this same bill, indicating strong bi-partisan support of the measure in that branch.

House Democrats appeared both surprised and angered over the Republicans’ attacks on the move to provide what in their opinion was a necessary appropriation to do the work expected of them by the public.

“This is about us being able to do the job we were elected to do, and that is done by our staffs,” argued Liz Thomson, Democratic Representative from Albuquerque, as she pointed out that legislators were not feathering their personal nests.

She went on to ask the Republicans a series of questions eliciting admissions by the Republicans how legislators were not increasing pay (which they do not get) or per diem (which is set independently through provisions of the state constitution).

Thomson pointed out the Republicans were expressing so much questionable outrage over such a small part of the budget, stating “we could gut it [legislative budget], we could shut this place down, and it wouldn’t have very much effect” on the bottom line of the state budget: “It’s about two tenths of one per cent of the state budget.”

Her questions also exposed the indifference of many financially comfortable members towards the need of working people including legislative staff.

When she asked if he knew when payday was for the staff of the legislature, Republican Representative Paul Bandy, who offered an amendment which would have cut spending of staff among other items, responded with: “You know I don’t know. To tell you the truth I never paid attention to that. I never paid attention to when we’re supposed to get our per diem either, it just shows up on the desk.”

So much for empathy.

Back to why the legislative budget is important in relation to the overall state budget.

As New Mexico has a so-called ‘Citizen Legislature” most work done preparing, analyzing and performing oversight of the state budget and monitoring the success or failure of laws passed by the state, falls to the staff of the legislature.

The executive branch in all state governments across the country are checked by their legislatures – many times acting as a so-called watchdog.

One of the stories referred to above which ran in today’s Journal illustrates the importance of legislative review of state agencies. According to Ms. Heild’s story:

“A Legislative Finance Committee evaluation in 2014 concluded that 36 percent of children who are the victim of maltreatment substantiated by CYFD and remain in the home will be abused or neglected again before they are 18.

“The largest segment of child victims in New Mexico in fiscal year 2015 – some 1,193 children – were less than 1 year old, according to federal data. The second biggest group: those age 6.”

The story ends with this paragraph:

“We (society) are just doing more damage to our kids,” said a former CYFD placement worker. “It isn’t just the dirty home where a mother got mad and spanked them. These days it’s beating them with a 2 x 4 or hitting them over the head. Or throwing them out of the house. It isn’t what used to count as abuse. It’s a lot of awful terrible things that happen.”

In the other front page, Sunday story, Michael Coleman of the Journal’s Washington Bureau writes:

“If New Mexico’s population growth were a heart patient, it would be flatlining.”

His story continues about the failure of New Mexico to register any significant growth in the state’s population since 2010, with a quote from a respected polling and statistical analyst:

“Brian Sanderoff, president of Research & Polling Inc., analyzed the census numbers for the Journal and concluded that the population stagnation is unprecedented in New Mexico history.”

Coleman also interviewed University of New Mexico Bureau of Business and Economic Research expert Robert Rhatigan, who stated “People are leaving this state en masse and at a rate that has never been seen before,” he said.

A spokesman for the Governor suggested reasons for the stagnant growth lie with anyone other than the executive branch at the Roundhouse, essentially blaming it on the federal government and the national recession (of 2008-2009).

He never mentioned his boss has overseen New Mexico’s economic development for the past six years.

Such failures are not just measured by statistics or demographics – they impact the quality of life for the state’s residents. For example, the last paragraph of Mr. Coleman’s article reads:

Which brings this discussion full circle.

The Democrats argue the House Republicans’ and Governor’s whittling away at the legislature’s budget damages the ability to do their job – to assess what is right and what is wrong in state government, then hopefully fix the problems.

They also point out that when the House Republican leadership had to hand over the levers of leadership along with office supplies and related staffing support a few weeks ago, the cupboard was bare.

According to new Majority Leader Sheryl Williams Stapleton, “This leadership [House Democrats] took over and had no supplies. And the cabinets were bare, like decimated, there was nothing there.

She also pointed out when power passed from the House Democrats to the Republicans about two years earlier, Democrats and the previous House Clerk gave the Republican appointee access within weeks after the election and well before the start of the new legislative session.

“When we started [this session] we had nothing, we had no supplies to start with.

The Majority leader concluded her remarks to Republicans stating, “You know we have serious work ahead of us,” and suggested they work together.

The Republican answer to the suggestion: all House Republicans voted against the legislative funding proposal, and once it was passed by the House and sent along to the Governor, she immediately vetoed it.

The very partisan approach of the Republicans on a budget item that is especially important for oversight reasons, should make it clear to the new Speaker that, despite his hope, the other side of the aisle has one agenda …

Whatever the Democrats suggest, House Republicans are determined to oppose.