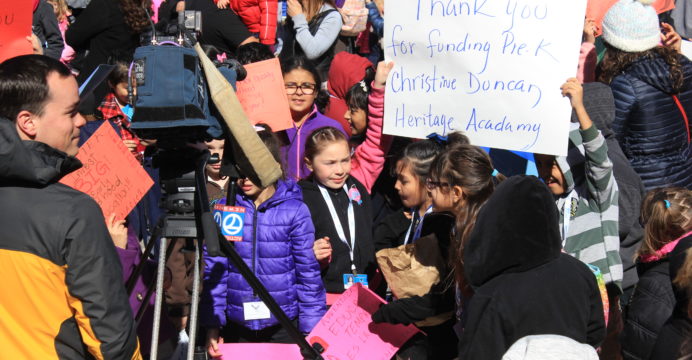 Children arrive at New Mexico Roundhouse to lobby for a pathway to their future - early childhood education.
HomeCurrent News
Mar 3, 2017 by Bruce Wetherbee -

The Time To Pass Early Childhood Education is NOW. 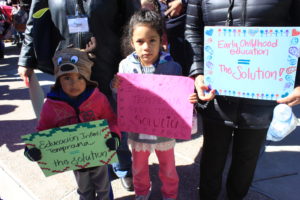 Kids gather to tell lawmakers they need a chance.

A few days ago hundreds of very young children of New Mexico arrived at the Roundhouse to make their case for the legislature to place a constitutional amendment on the ballot in 2018, which if adopted by the voters, would allow for “the use of additional funds to increase the availability and quality of early childhood education.” – NM Legislative Education Study Committee (LESC) analysis of HJR1.

These kids are full of life and promise. They arrived with parents, teachers, and other advocates with signs and a message for legislators: ‘we are worth you not delaying our ability to reach our full potential as adults.’

According to a paper produced by ReadyNation (Strengthening business through effective investments in children and youth), entitled Benefits and Outcomes of High-Quality Early Childhood Education: 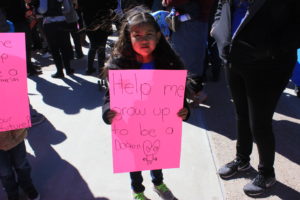 This girl has a future she wants to get started on.

It would be hard to find anyone to argue against the merits of having all children receive early education as proscribed in HJR 1.

The hesitancy of several key legislators to back the bill seems to be based upon their belief that New Mexico state government cannot afford it at this time, and that the funding should not come from the permanent fund of the state.

But how can New Mexicans not afford to do this? If not done now, the opportunity for these kids becomes diminished.

Filed by Representative Moe Maestas, this measure has made its way through the House committee process, and is about to be finally voted upon in the House. It then goes to the Senate.

The lobbyists lined up and claimed the companies they represent should not have to pay for this. Why shouldn’t the same companies that get favored treatment by the New Mexico legislature and the governor step up and be contributing members of the community? 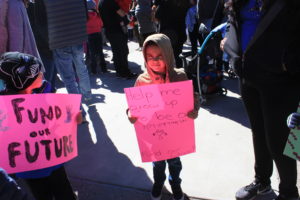 He wants to help pets.

It’s time for politicians to do the right thing, not talk about it.

And it’s time to stop holding these kids’ future hostage to hidden agendas of a few powerful legislators.

In the section of the analysis by the LESC entitled Synopsis of Bill it further explains:

“House Joint Resolution 1 (HJR1) amends Article XII, Section 7 of the Constitution of the State of New Mexico to permanently increase annual distributions from the Land Grant Permanent Fund (LGPF) by 1 percent for the purposes of educational programs and early childhood educational services beginning in FY20.”

The time to pass this along to the public is now.