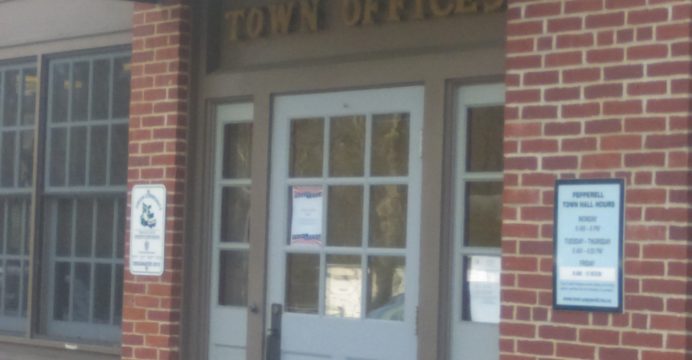 Pepperell, Massachusetts – The Master Plan Advisory Committee (MPC) meeting Thursday night started out contentious – with residents complaining the time allotted by the chair for public comment was not sufficient to discuss the composition and mission of the committee.

Most who spoke wanted more women appointed to the MPC, as well as the creation of subcommittees, which would provide other voices and interests being part of the process of developing a long range plan for the community.

As the evening progressed, concessions incorporating more citizen participation seemed to quiet some of the criticism from the audience.

After the open forum session of the meeting was gaveled closed, MPC member Rob Rand questioned the rules of the committee, asking the chairman “who made them?”

Rand, who has complained the MPC needs more women on the committee and a better cross representation of interests in the town, also wanted the MPC to incorporate the opportunity for audience input as each agenda item is discussed during working sessions .

After considerable back and forth among the MPC members, it was decided to give the public time at both the beginning and end of the working sessions of the committee.

While Rand and other members were still concerned the amended process was less effective than allowing the public to comment after each topic, things moved on to a discussion of the make-up of the committee.

At the April 19, 2018 meeting of the MPC, Chairman Roland Nutter announced the matter of the composition of the committee would be placed on Thursday evening’s agenda.

During that April meeting, Nutter opposed the addition of more members to the MPC stating “The committee has been picked. Adding more people to it isn’t really going to change the output.”

The previous board of selectmen (BOS) appointed the MPC members, but residents expressed concern that the committee was not representative of the town as a whole.

Nutter, who is also a member of the BOS, had agreed to appoint the members of the MPC from a list recommended by town administrator Mark Andrews and town planner Steve Parker.

As The Candle reported in story published on April 30, 2018, “at least nine out of thirteen of the committee members are also members or associates of the Pepperell Business Association (PBA).” [1]

Since the April meeting of the MPC there was an intervening town election, with Bill Greathead winning a seat on the BOS.

At his first BOS meeting, in response to residents asking for a broader representation of the town on the MPC, Greathead stated “every major committee in this town should have slots open for members of the community.”

“We want the opinion of stay-at-home moms … the engineer … the laborer,” continued Greathead.

Selectwoman Lisa Ferolito similarly supported more inclusivity and expansion of the size of the MPC at that BOS meeting.

Thursday night Ferolito reminded the eight MPC members present, that the BOS would soon take up the issue of increasing the size of the planning group.

She asked the MPC members to provide their opinion on expansion.

As the MPC members present discussed the issue of adding more members, Nutter read a letter  from the co-chair of the MPC, Charles Walkovich (who is also a member of the planning board and the PBA), opposing efforts to increase the number of members on the committee.

Walkovich wrote he had “found no recommended composition for a Master Plan Committee, nor have I been able to identify any best practices …”

He identified the master plan committee processes of three towns – Tewksbury, Dunstable and Chelmsford – to bolster his claim that “Clearly the approach that the Town of Pepperell engaged was significantly more inclusive then (sic) other local towns.”

The co-chair also seemed opposed to any formal subcommittees which would include residents other than the fourteen MPC members already appointed.

In his missive to the MPC, Walkovich never mentioned the approach the neighboring town of Groton used – a town not only adjacent to Pepperell, but with many of the same characteristics and similar demographics.

The populations of the three towns that Walkovich chose for his comparison were anything but similar to Pepperell as relates to population: Chelmsford having almost three times (33,022), Tewksbury about two and a half times (30,010), and Dunstable having less than a third the population (3,179) of Pepperell (11,705).

Groton, on the other hand, has a population of 10,873 – significantly closer than all of Walkovich’s examples.

Unlike the limited number of participants advocated by Walkovich, the Groton master plan effort included all seven of the planning board members and about thirty-six residents who served on various subcommittees.

A copy of the Groton’s Master Plan (containing a description of how the advisory committees were populated and worked, can be linked to by clicking here.)

Along with Rand, MPC members Nancy Lebedzinski and Diane Cronin took the lead in arguing for increasing the size of the committee and for the appointment of more women to the MPC.

Other members offered varied concepts regarding increasing participation of the public.

Joyce Morrow suggested that people become members of subcommittees, as an alternative to being on the MPC as a member.

Cronin reminded the MPC members present that there was a lot of positive energy and participation being offered by people in the audience who have been attending the MPC meetings.

It was also noted that some who had applied to be appointed, but had not been recommended by the town administrator and the town planner, continued to show interest.

Lebedzinski moved that the MPC recommend to the BOS the appointment of seven additional people, with a priority being given to women so that the committee would be appropriately balanced.

When Chairman Nutter called for the vote, all members supported the Lebenzinski motion.

The issue of whether to have subcommittees was left for the next meeting.

Other matters that were discussed between the audience and committee members included:

Edits to a Master Plan Survey to be distributed to town residents;

Suggestions for more emphasis on sustainability;

Addition of energy issues to be reviewed;

The need to include public health as an element of study; and

Inclusion of students in the master planning process.

By the end of the evening, Chairman Nutter had allowed more of a back and forth type session between the audience and the committee.