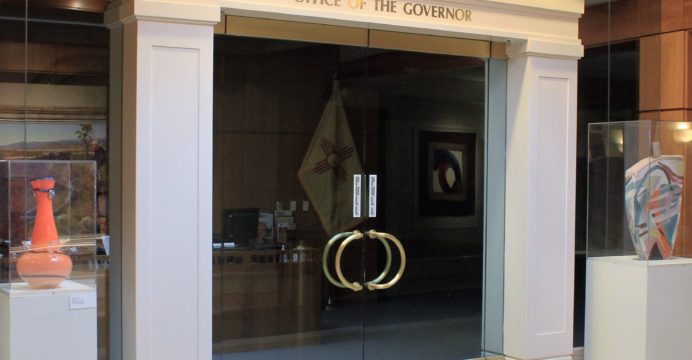 UPDATE: Part 1A – The Governor, her Chief of Staff, General Counsel, and the WCA Director continue their collective silence on why more qualified women lawyers were passed over in the appointment of an assistant cabinet position for a male attorney with less experience and who had been accused of inappropriate behavior towards women.

When Ken Owens was hired as an attorney at the New Mexico Workers Compensation Administration (WCA) by the Martinez Administration in March of 2018, he had been an attorney for a handful of years – most of them as an assistant attorney general under former Attorney General Gary King.

He claimed to have years of experience as a manager, although that experience was fraught with objections and allegations made by women about his management style and general behavior.

In June of 2015, his tenure with the AG was abruptly terminated a few weeks after a lawsuit was filed alleging he had “bullied nonprofit employees and harassed a female worker on social media while using the name “Mr. Smooth,”” as reported in the Albuquerque Journal at that time.

Last week, The Candle reported on Owens’ double promotion by the administration of Governor Michelle Lujan Grisham to the positions of Bureau Chief (Attorney Supervisor) for the Mediation Bureau, and as an acting Deputy Director of WCA.

These two positions are NOT meant to be held by one individual, as they both require the attention of a full-time administrator.

(Click here for earlier story from The Candle on Owens’ promotions.)

Since that report, The Candle received copies of communications which indicate Owens’ alleged transgressions were likely discovered by the governor’s staff in charge of vetting candidates for senior administration positions such as Deputy Director of WCA.

Just a few months before he received the first part of his double promotion, he had applied for and then withdrew his nomination to the Deputy Director position.

Last week, in response to an Inspection of Public Records Act (IPRA) request made to the governor’s office, The Candle received copies of several communications regarding Owens’ earlier efforts for promotion at WCA.

On Tuesday, November 26, 2019, Owens met with Teresa Casados and Matthew Garcia (the governor’s chief of staff and general counsel) regarding his nomination to the post of WCA Deputy Director.

A few hours after the meeting Owens sent the following email to Casados and Garcia:

I wanted to thank you for the opportunity to meet this morning and discuss the Deputy Director of Operations position with the WCA. I believe I have the background and temperament to be a valuable member of Loretta’s executive leadership team and I am prepared to hit the ground running if asked to do so.

If you have any additional questions please just let me know.  Hope you both have a pleasant and restful Thanksgiving.

The Candle also received a copy of an email sent that same day in November 2019 from a state legislator to Teresa Casados offering his highest recommendations on behalf of Owens.

But things seemed to take a negative turn for Owens by early December.

In another communication received through the IPRA request, on December 11, 2019, Owens seems to be trying to explain away some incidents that were raised in the background check conducted by the governor’s staff.

He writes to April Vigil, administrative assistant to the governor, regarding conversations with Casados about his background check :

I am following up on my earlier voice message to offer further clarification regarding my background check.  Some of the information I was able to confirm with Ms. Casados but other information was completely unfamiliar and I am unsure if they actually relate back to me.  Though Ms. Casados provided some the approximate years for some of the incidents, I did not write those down.  A couple of incidents, one almost 30 years ago, did occur to me after our conversation and I would be glad to provide the limited detail I do recall.  I have had multiple background checks to include an Army secret security clearance, State of NM background checks to include the AG and CYFD and for the NM Bar and manyof (sic) these incidents were not identified so they have caught be (sic) completely unaware, but I understand the need for due diligence in this process.

If your office would be willing to provide a copy of the report or a summary of the questioned incidents and approximate date I will try to provide some clarification.  I am also available for another phone or in-person conversation if that would be helpful.

Thank you.  Appreciate any guidance or assistance you may offer.

(In a follow-up IPRA request made of the governor’s office on Monday, The Candle has requested a copy of all documents related to the background check referred to in Owens’ email. And we will provide a further report once received.)

Just thirteen days later, on December 24, 2019 Owens withdrew his name from consideration for the position of Deputy Director.

In an email to the governor’s chief of staff, Owens writes:

I met with Director Lopez this morning and informed her that I have decided to withdrawal (sic) my application for the position of Deputy Director in the Workers’ Compensation Administration.  I very much appreciate Loretta’s trust in putting my name forward and I appreciate you and Matt taking the time to meet and interview me.   I remain convinced that the WCA is being guided by quality leadership and I look forward to supporting our future Deputy in any way that I can.

Thank you again and Happy Holidays.

It appears from this series of emails that Owens’ background check precipitated the withdrawal of his name for the position of Deputy Director on December 24. 2019.

What is not clear is why Director Lopez offered Owens the “acting” Deputy position (essentially the same position) several weeks later – and why the governor’s staff consented.

As evidence of the subsequent offer, in an email to Director Lopez, Owens wrote on March 9, 2020:

I appreciate the discussion we had last week and I have had some time to reflect on your proposal regarding the Deputy position and I would like to take advantage of that opportunity, if still available. I do have some questions as well as some suggestions that I would like to meet to discuss. As mentioned last week, I would like to pursue the Mediation Bureau Chief position but even if offered I think there is a structure that would still allow me to serve as your Acting Deputy for Operations.

I have openings on my calendar tomorrow, Tuesday, from 8-10 and on Wednesday after 3:00. Would either of those work on your schedule?

In light of the recently received documents, we wrote to WCA Director Lopez last Friday asking her for a chance to interview her relative to Owens’ appointments and whether she was aware of the information contained in the background check conducted by the governor’s staff.

We pointed out that “the public has a right to know why Mr. Owens was promoted over other more qualified individuals, including women attorneys, especially given the bullying and other inappropriate behavior allegations” as reported in The Candle’s story.

We have yet to get a response from Director Lopez, or the governor’s staff to earlier questions regarding their collective choice to promote Owens and turn down the several other candidates, many of whom were women lawyers with considerably more experience than Owens.

The previously planned second part to this story will be posted soon.