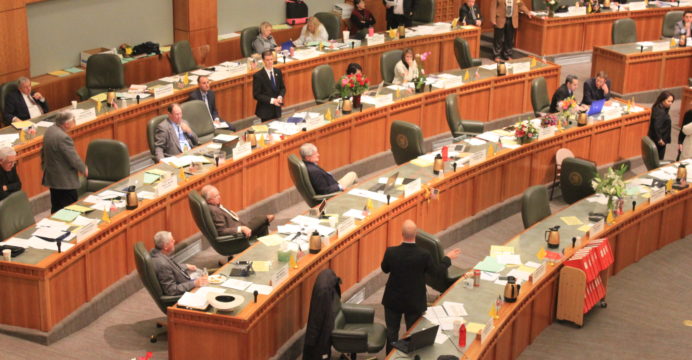 Have Democrats boxed themselves into advancing Governor’s agenda – cuts, sweeps, and more cuts?

The Democrats in the New Mexico Legislature need to start thinking outside the box the Governor and the Republican legislators have them trapped in.

Yes, the Democrats have been left a mess by the Governor.  And the Republicans are not helping to seriously deal with the solvency issues. But it’s time the Democrats out-maneuver them.

They need to show there’s a platform they are ready to advance and vote for which sets them apart from the Republicans – remember November’s promises?

The sad thing is the Senate missed that opportunity in its initial attempts to deal with the so-called solvency crisis the state is in with its current budget (FY 17).

The Senate approach for the immediate problem was more cuts and sweeps.

No revenue package; although to his credit, Senate Finance Chair John Arthur Smith has indicated he will eventually propose a gas/fuel tax increase.

According to the reporting of Andy Lyman of the NM Political Report:

“New Mexico state Sen. John Arthur Smith, D-Deming, chairs the Senate Finance Committee and is considered one of the most fiscally conservative Democrats in Santa Fe. Smith said he plans to file a bill to increase the existing state gas tax by 10 cents per gallon. Half of the money would go to local governments and half would first build state reserves, then fund state roads.” – (Click here for link to Andy Lyman’s story.)

Maybe not enough to do what Democrats promised people during their campaign to win back the legislature; but it’s a start – especially in addressing some of the FY 17 solvency issues, like low or non-existent reserves.

That gas tax measure should have been included as part of the package of bills sent to the House last week.

The House is taking up those bills now and although there may be some procedural issues about adding a tax amendment to any of those bills, there are ways the House leadership could address them – such as having the House Chair of the Appropriations and Finance Committee and the House Chair of the Taxation Committee introduce a bill this very day and refer to a joint meeting of the two committee or streamline the process in some way to report a bill to the floor.

They could also defer action on the third reading of the Senate bills dealing with the solvency issues in order to take them up when they present a gas tax bill in the same day’s activities on the floor.

(And then again, maybe a smart legislator could figure a way to amend one of those bills in third reading today.)

That would send a message that the Democrats are about action, not just empty promises.

It is important that any appropriation measure, whether it is for FY 17, or FY 18, get to the Governor’s desk with a significant and certainly sufficient revenue package to deal with the promises Democrats made when they campaigned to take back the House and improve on their numbers in the Senate.

Let the Governor deal with the issue if she really wants to cut spending even further.

The Democrats need to think this process through … that is the responsible thing to do.