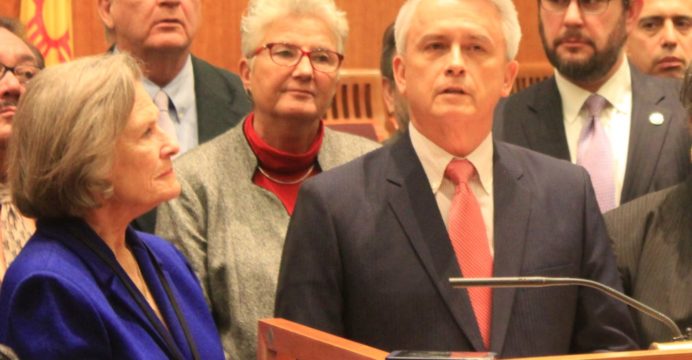 For progressives, the problem ain’t the Republicans, or Governor Martinez … it’s the Democrats.

It would be generous to describe the Democratic leadership in New Mexico’s legislature as Dems-lite.

This week two key bills which represented fairness and boldness in solving New Mexico’s budget and revenue problems and in offering hope for turning the economy around, were killed in committees … by Democrats who are part of Speaker Egolf’s and Senate Majority Leader Wirth’s leadership team.

So much for the promises made all during the election cycle about bold new leadership for everyone, not just corporations and the wealthy.

On Wednesday, House Chair of the Labor and Economic Development Committee, Representative Bill McCamley, saw his bold approach to invest some of the permanent funds over several years to build needed infrastructure and generally support economic development here in New Mexico – not just enriching brokers on Wall Street – die in his own committee.

Representative Stephanie Garcia Richards (who was appointed as Chair of the House Education Committee by Speaker Egolf) joined Republicans in killing McCamley’s bill by one vote.

In a conversation with The Candle, McCamley (seen as one of the truly talented and deep thinkers in the legislature) was gracious about his bill being done in by a Democratic colleague – but you could tell it hurt.

Such an episode of a failure in leadership loyalty did not occur when the Republicans controlled the House.

And although Garcia Richards voting with the Republicans should not be surprising, it shows weakness when it comes to standing up for working family priorities.

She has done that on key measures (particularly controversial ones) throughout her legislative career – like being the only Democrat to vote with the Republicans on a solvency budget that cut state services and refused to address revenue enhancements during the special session last fall.

But Egolf rewarding her with a Chair of a committee, that’s a head turner.

Garcia Richards voting with the Republicans on such a key proposal indicates the captain does not know how to keep the galley all rowing in the same direction, as well as not having a firm hand on the rudder.

McCamley’s effort should have at least been advanced to other committees. It deserved a chance to change the dynamic or at least the debate about how to address a state which is dying economically.

And it’s not much better in the Senate.

Senator Bill O’Neill offered a bill to undo the Richardson tax breaks for the wealthy which has cost the state hundreds of millions of dollars annually, adding to the inability for the state to adequately fund needed programs.

When the Republicans moved to table the bill without even discussing O’Neill’s measure amongst the committee members, the Democratic Chair of the Corporations and Transportation committee, Senator Clemente Sanchez, and the Democratic President Pro Tem of the Senate, Mary Kay Papen, both joined the Republicans to stifle discussion, and essentially kill the bill.

Either the Democratic leaders are still wet behind the ears as to how to run the place, or they just plain forgot who brung them to the dance – or they don’t care.

These folks came to power on the backs of a coalition of progressives: unions, working families, women’s organizations, gender equality advocates, environmentalists, and others.

Not only did these groups and individual progressive voters work their hearts out to deliver the House to Speaker Egolf and increase the number of Democrats in the Senate, they also contributed millions, yes millions of dollars in generally small donations to make that happen.

(It should be noted that while labor organizations contributed large amounts of money to candidates and political action committees that support progressive causes, the money came from members of the unions – so while aggregated into large contributions, the labor contributions essentially were from hardworking people making small donations – unlike the money coming from people like the Koch brothers to the Republican leaning PACS.)

Here’s to hoping they turn this defection of leaders around. There needs to be a group effort to at least move an agenda of hope forward; and the rumors are maybe the Democrats are going to start voting like Democrats used to.

Supposedly the Senate Democrats decided in their closed caucus two days ago, they would advance a revenue package; and the House Taxation Chair has indicated he is putting a package together that will have some promise.

But, given the performance so far, who knows how excited to get about their promises?

Remember the press conference of January 26, 2017, during which the Speaker and Senator Clemente spoke of the Democratic economic development package of six bills?

The Journal reported “Sen. Clemente Sanchez, D-Grants, chairman of the Senate Corporations Committee, vowed the Democratic-controlled Senate will pass the six bills within the next 10 days and send them to the governor for final consideration”. – Journal, Thursday, January 26th, 2017.

Last we checked, none of those six bills has made it to the governor – that’s 16 days and counting.

The Democrats need to be bold with action, not just promises.

And their leaders need to remind their chair people that sticking to a game plan is a responsibility of one granted the privilege of being a committee leader.

The Republicans know that.

(The Candle will be publishing a story early next week detailing the effort and promises made to the people of New Mexico by the Democrats during the 2016 election cycle – and just where things really stand as the 2017, 60-day session approaches its midpoint.)