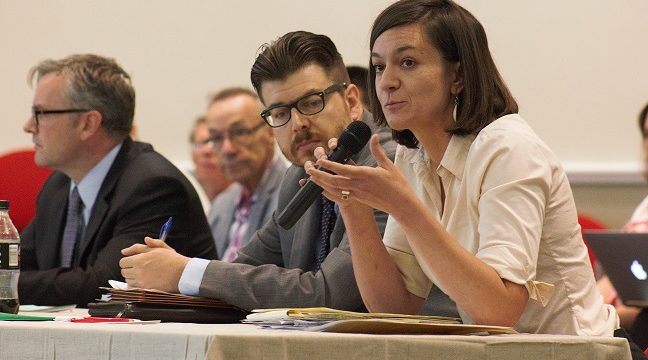 Advocates wonder: Is this their (Grand)Father’s Democratic Party? – Dems to cut foodstamps.

Just when it looked like they might be taking the lead and addressing the needs of people they have traditionally protected, the Senate and House leadership seems to have taken another step backwards in figuring out priorities (not to mention messaging).

The front page of today’s Santa Fe New Mexican carries a story of cut backs in the Supplemental Nutrition Assistance Program (SNAP) – what used to be referred to as the Food Stamps program.

What most would expect to read would be that the cuts were proposed by the Governor.

They are being proposed by the Democratically controlled budget committee.

As Justin Horwath of the New Mexican points out in his article the population affected by the proposed cutbacks are amongst the most vulnerable, and although the cutbacks would not apply to the majority of recipients, they would apply to over 10,000 elderly and disabled New Mexicans.

His article goes on to explain how the state is short on money and this food supplement approach for the elderly and disabled is on the chopping block.

Proponents of keeping the funding argue that the state needs to keep a program like this going and have been advocating for a serious revenue enhancement program for state government. As Horwath writes:

“Sovereign Hager, staff attorney with the New Mexico Center on Law and Poverty, said the proposal to cut the program is a direct result of the state not raising adequate revenue to fund government while giving tax breaks to corporations.

“Food insecurity among New Mexico’s elderly, which is among the worst in the nation, has decreased in the past decade with the state’s funding of the program, she said.

““We do not want this to backslide,” Hager said.” – Santa Fe New Mexican.

And in a statement quoted in Horwath’s article it seems the Governor has shown more concern for the vulnerable than do the Democrats:

“Kyler Nerison, a spokesman for the state Human Services Department, said the program provides important benefits and that the “governor’s budget proposal calls for state government to live within its means — not force the most vulnerable New Mexicans to tighten their belts.”” – Santa Fe New Mexican.

Democrats argue the Governor’s statement is disingenuous at best, as she refuses to support any serious revenue enhancement which would eliminate the need for such drastic cuts.

But many advocates for groups the Democrats have led the fight in the past for are wondering why the leaders in the House and Senate – both controlled by the Democrats – have not yet stepped up like they promised once they got back control of both branches of the legislature and advanced some serious and sufficient revenue measures.

More on budgets and revenue this week.