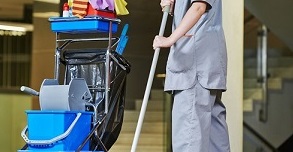 UNMH – A Tale of Two Standards.

This is a story that should infuriate policy makers and the public alike – especially considering the strain the current pandemic is placing on our health system.

His is the best of contracts.

Hers is far, so very far, from even being fair.

The housekeeper’s contract pays her less than $12/hour to scrub and prepare hospital rooms – including the rooms of COVID-19 patients, exposing her to a devastating disease.

His contract pays him $147/hour, as he sits at home, or anywhere else he wants.

They work for the same boss – the University of New Mexico Hospital.

Well, she really works for her meager paycheck.

He in fact doesn’t work at all – but he still gets a fat $5,800 check every two weeks, for doing absolutely nothing.

He is paid for doing nothing – precisely because his boss fired him.

This is not a misprint. It’s tragically true.

She belongs to a very large group of workers who make less than a living wage – about 1,200 of the support staff of employees at the hospital who make under $15/hour.

He belongs to a rather small and elite group of employees favored by the hospital brass.

We are not going to mention her name, because she is representational of a lot of co-workers, fearful of retaliation if identified in a story about the unfairness of the two standards of treatment in her workplace.

But we will name him – Steve McKernan, the former CEO of UNM Hospital.

McKernan worked at the hospital for 37 years before his retirement, including holding the position of CEO. According to his last employment agreement as CEO he received a base salary of $517,591.57, along with other benefits.

While announcing his pending retirement in August of 2017, McKernan received gushing recognition from his boss UNM Chancellor Paul Roth, who as he awarded McKernan the title of Emeritus CEO of UNM Hospitals stated, “I have been fortunate to call him a colleague and a friend these many years and I will miss him greatly.”

McKernan was also acknowledged by a syndicate of New Mexico academic and political heavyweights, including then U.S. Congresswoman Michelle Lujan Grisham who entered plaudits into the Congressional record as he prepared “for his retirement.”

But McKernan got a lot more than congratulations, a title, and good wishes from Chancellor Roth.

As The Candle reported in March, McKernan and his old friend the Chancellor, inked a sweet deal about 72 hours before announcing McKernan’s retirement – the details of which remained hidden from the public for more than two years.

Last December, The Candle began researching documents it received through an Inspection of Public Records (IPRA) request for an investigative series on the way executives, directors, and senior managers are compensated compared to the way direct care and support workers of the hospital are paid.

We were tipped off that the disparity in treatment was substantial and will be reporting on those matters in an upcoming series in The Candle.

However, while reviewing some of those documents we noticed McKernan was being paid as an employee and drawing $5,800 in regular pay every two weeks – despite having retired a year earlier.

His hourly rate was also the fifth highest of all UNMH payroll employees.

We submitted a new IPRA request for all documents related to McKernan’s employment and received among those documents copies of several years of employment agreements prior to his August 2017 retirement announcement.

Included among the documents was a new three-year contract which went into effect approximately one year after McKernan’s retirement – but that contract was signed by McKernan and Roth just a few days before his retirement announcement.

Roth agreed to have the University hospital pay McKernan approximately $150,000/year from about July 2018 through June 2021, along with health, dental, and vision benefits, accrued vacation leave and more.

The contract also had a requirement binding UNMH to pay the full salary compensation bi-weekly through the end of the contract should the hospital terminate McKernan’s employee agreement without cause.

In November of 2017, McKernan began using his leave, exhausting the leave about eleven months later.

It appears he did some intermittent work for the hospital, and was paid for that in addition to the pay he was receiving for his earned accrued leave.

UNM Hospitals appointed Michael Chicarelli, DNP, UNM Hospital interim CEO in the fall of 2017, to replace McKernan until a permanent CEO was appointed.

In May of 2018, UNM Hospitals chose Kate Becker as McKernan’s replacement. Becker was given a three-year contract – with an annual base salary of $620,000 – which took effect in July of 2018, coinciding with McKernan’s half-time $150,000/year employment agreement as Executive Director of Planning for UNM Hospitals.

Although McKernan’s agreement originally stated it would commence on July 1, 2018, he was still using his accrued leave in the early fall, so it appears the agreement was amended to change the starting date to December 2, 2018.

It was also amended to require that McKernan report to the new UNMH CEO, and to “be available for consultation at the request of the UNMH CEO” – that being Becker.

Later that day, McKernan sent an email to Becker with the following inquiry:

“It was nice to meet with you this morning. Attached are the signed employment Amendments.

“As a follow up to the conversation this morning, it would be nice to receive more information about the plan for the job that I will be asked to do when I return in December. It would also be nice to understand the working condition. Thank you for your consideration.

“If there is anything I can do for you, please do not hesitate to ask.”

For some reason (which no one will speak to the details of), shortly after that November 9th email something seems to have unraveled, producing a very costly outcome for the UNM Hospital.

Becker Fires McKernan Without Cause.

Becker sent a notice of termination of employment agreement letter to McKernan on November 28, 2018 referring to a discussion she had with McKernan, and writing,

“If you have questions, you may contact me directly. Benefits questions may be directed to Sara Frasch, Human Resources Administrator, at sfrasch@salud.unm.edu (272-1801). Thank you for your service to UNM Hospitals.

And with that letter, before McKernan had really started his work per the Roth engineered employment agreement – just days after he sat down with his new boss, Becker essentially fired McKernan.

The only heavy lifting McKernan had to do for the next two and a half years to be paid about $5,800/every two weeks, was pick up a pen and sign the Release of Claims document.

It is a bit of a mystery why not one of the principal actors will explain what really happened. Not McKernan, not Becker and especially not Roth, not even UNM Counsel Scot Sauder who signed off on the agreements (or at least some of them).

Becker was appointed as CEO almost a year after Roth made the deal with Mckernan.

But she, along with Roth, apparently decided not to require McKernan to do his job – she let him slip out the door with a bundle of UNMH money, and to this day, she won’t explain why she fired him.

Cinnamon Blair, Chief Marketing & Communications Officer for UNM wrote the following in an email to The Candle:

“Following the hire of the new UNM Hospitals CEO, she and Dr. Roth determined that Mr. McKernan’s services were not needed, and opted to terminate the contract … Because this contract termination was for the convenience of UNM rather than for cause, Mr. McKernan was owed the remaining salary under the contract until expiration in 2021.”

But the email provided no reason why or how it was convenient for UNM Hospital to pay McKernan for more than 30 months to do nothing.

UNM President Garnett Stokes, who in fairness to her, also came on the scene after Roth and McKernan cooked up the deal, provided the following statement, also through Cinnamon Blair,

“Since becoming President, I have actively sought to improve our processes, especially those related to financial accountability and transparency. I support a number of decisions brought forward by my senior leadership on a regular basis, and the decision of HSC leadership to terminate this contract was one of those. I have made it very clear to UNM leadership that the University is accountable as an employer and to the public.”

Becker, Roth and Sauder owe the public an explanation as to why, after all of the accolades made about McKernan’s years of service to UNM Hospitals, his services were suddenly not needed.

The Candle will be following up this report with more about what may have motivated this mismanaging of financial resources at UNM Hospitals.

But for now, here is a look at what else was tucked away in McKernan’s going away package devised by him and Roth.

He continues to receive his “health, dental, and vision insurance benefits until June 30, 2021 on the same basis and cost afforded to others employed by UNMH in a half-time status.

Between November 1, 2017, during the period he used his accrued leave time, and before he began his new three-year employment agreement, any “consultative services” he provided were to be “paid as regular hours and not charged to his leave bank.”

For Discretionary Contribution, UNMH was also required to contribute $53,000.00, on McKernan’s behalf to the UNM Hospitals 401(a) Plan, as amended, for Fiscal Year 2017.

That is a lot of special treatment even for one of the elite group of employees favored by the hospital brass.

Remember the housekeeper and her 1,200 coworkers making less than a living wage we wrote about at the beginning of this story?

They got a pay increase equivalent to between $18 and $30/a week through the latest contract approved by UNM Hospitals.

To put the extra deal Roth created for his friend McKernan in perspective, the total value is about $640,000 in added income and benefits to McKernan, above what was an already handsome retirement income.

In mid-April The Candle will report on the disparity in compensation at UNM Hospitals, and the failure of so-called progressive political leaders to adequately address that income gap.

In the next report on the McKernan deal, The Candle will focus on why Becker and Roth determined McKernan’s services were no longer needed.

And we will also report on why UNM’s legal office has failed to produce a copy of the fully executed Release of Claims document which is a required for payments to have been made to McKernan.

McKernan signed the document, of which we have a copy. But the copy suppled to us in our original IPRA request has no signatures from UNM.

The UNM legal office has failed to deliver it by two deadlines they set themselves. The latest promise is that we will receive it on April 16, 2020.

The requested copy should be easily produced by UNM’s legal office if it has it on file.