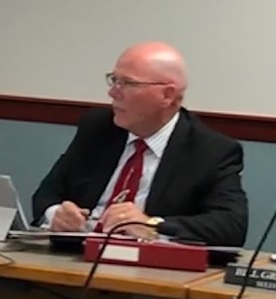 What Chairman Nutter Knew, And When He Knew It

Pepperell, Massachusetts – Roland Nutter, chairman of the town’s board of selectmen, has been either evasive or silent when asked what and when he found out about the details of a complaint regarding possible fraudulent payments to several town department heads for time not actually worked.

One of the positions referred to in the complaint is held by Nutter’s wife. 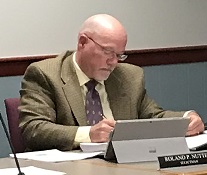 Chairman Roland Nutter at Pepperell Board of Selectmen meeting in April 2018.

Inquiries of Nutter have also been made in person and through multiple emails about his refusal to recuse himself from deliberations regarding the complaint, brought by the town’s assistant assessor in February and April. Nutter has provided no response.

The assistant assessor, Maureen Bolger, asked the board of selectmen to investigate her allegations that she was bullied and threatened by the former town administrator, Mark Andrews, because she confronted him about his approval to regularly pay some town employees for hours they did not work.

The original complaint was filed with the board of selectmen in February.

Chairwoman of the board at that time, Melissa Tzanoudakis, wrote back to the assistant assessor seeking details relative to the claim of possible fraud.

On April 20, 2018, Bolger delivered a letter to the town hall in-boxes of each member of the board, including the one belonging to Nutter.

The letter specifically refers to the position held by Nutter’s wife, the town’s collector/treasurer, as being one of the positions alleged to have received pay for hours not actually worked.

Tzanoudakis did not seek reelection in the Spring, and Nutter took over as chair of the board of selectmen.

Other than the Tzanoudakis letter seeking more information, the board of selectmen did nothing from February through most of June – despite the selectmen receiving specific details that the board requested from the assistant assessor.

For his part, when he took over as Chairman of the board, Nutter basically ignored the matter from May through late June.

It was not until late June that the issue was raised publicly – and not by the board members.

Nutter Exposed for Having Two Sets of Rules – One for Everyone Else and One for Him and His Wife.

During the June 25, 2018 meeting of the board of selectmen there was a dicey exchange of words between Chairman Nutter and Selectwoman Lisa Ferolito regarding Ferolito’s statement at a previous meeting that, when she was the town clerk, she experienced Andrews interfering with public record requests.

Nutter and Ferolito have exchanged words several times over their tenure together on the board of selectmen, particularly over Andrews and complaints about his failure to run town government transparently.

And Nutter, who consistently defended Andrews’ performance, had previously berated Ferolito for not signing Nutter’s wife’s contract, which Andrews had negotiated while at the same time Selectman Nutter was approving a $17,000 boost in Andrews’ contract.

Ferolito refused to sign Andrews contract the same evening she refused to sign Nutter’s wife’s contract, because she felt it was not negotiated properly and that Andrews did not deserve what was essentially a 15% raise, while the town was having difficulty balancing its budget – but Andrews and Tzanoudakis approved Andrews’ huge raise before Tzanoudakis left office.

(Nutter’s wife’s contract was eventually rejected by William Greathead as well, who was elected at the end of April, replacing Tzanoudakis.)

At this June meeting Nutter claimed that Ferolito should provide details if she was going to criticize Andrews, stating “My point was, if that’s an issue we should be taking action because someone has violated the law, we should be doing it … if you have proof of that, then you should be forthcoming …”

She said her claims were detailed when she decided to resign as town clerk, rather than fall in line with Andrews’ approach to governance.

She also said she didn’t think that Nutter would act on anything that criticized, let alone investigate,  Andrews.

Before Nutter could move on to another item on the agenda, the assistant assessor spoke up from among the crowd in attendance.

“Can I say something?” asked Bolger.

“I put in a complaint about Mark Andrews and no one dealt with it,” stated the assistant assessor.

“You put in a complaint relative to the personnel board?” Nutter asked, then quickly answered his own question, “No, actually the grievance went to the chairman of that time.”

After some back and forth about former chairwoman Tzanoudakis not seeking reelection, Bolger objected to Nutter implying that the matter had been dealt with by Tzanoudakis.

Nutter replied, “Well, bring that to this board.”

The clearly frustrated assistant assessor, shot back, “I brought it to the board. The two of you were on the board,” stated Bolger, referring to Nutter and Ferolito.

Ferolito concurred with Bolger, and looking at Nutter said, “Yeah, she gave it to both of us.”

Still trying to distance himself from the issue, Nutter responded, “The chairman at the time was dealing with it.”

William Greathead, not having received information about the matter up to that meeting, asked for a copy of the correspondence to be produced.

John Moak, the interim administrative assistant appointed to replace Andrews, suggested that they needed to look into the matter.

From that meeting forward, Nutter has had barely nothing to say publicly on the complaint.

But he has been involved, behind the scene and in executive session, in what appears to be an attempt to derail any investigation.

In late July, The Candle requested documents dealing with the complaint, including emails between officials.

On August 2, 2018, Town Clerk Jeanne Survell provided The Candle with approximately 46 documents containing more than 100 pages, including the complaint, the board’s follow-up request for more information, and emails.

Among the emails was one from the town’s lawyer to Tzanoudakis acknowledging “… there is one charge that is under the Board’s jurisdiction (fraud) …” along with the recommendation that Tzanoudakis ask Bolger to provide more detail – which was subsequently provided by the assistant assessor in a letter dated April 20, 2018.

Interestingly, the response to The Candle’s freedom of information inquiry was missing that very important letter, which the assistant assessor delivered to the town hall mailboxes of all three members of the board of selectmen – including Nutter.

The letter contained a clear reference to the position held by Nutter’s wife as being among those believed to have received payment for hours not worked.

Another of the documents The Candle received was a copy of a letter the town’s labor counsel drafted for Tzanoudakis to send to Bolger, requesting that she provide more detail relative to the possible fraud.

Having heard the assistant assessor state at the June 25, 2018 board of selectmen meeting that she provided that responsive letter to each of the members of the board, it is highly questionable that this document would go missing.

The Candle confirmed by way of a phone call with the assistant assessor that she had in fact received the Tzanoudakis letter and had responded to it with the April 20, 2018 letter to each of the board members.

She provided The Candle with a copy of her response.

Not understanding why the town clerk failed to provide that document in the response to our document request, The Candle’s editor sent an email to the town clerk, interim town administrator Moak, and members of the board of selectmen on August 6, 2018, stating, among other things the following:

“Could the town inform me if that letter (see attached as Attachment # 1 to this email) exists in the files of the board of selectmen, and if not, would you find out why it is not contained in the town’s records? … If any town official held back information from Ms. Survell or Mr. Moak, in their effort to fulfill my request for the information, I would request the name of the official and their position, as well as their reason for not providing it.”

It is important to note that on August 6, 2018, all three members of the board of selectmen received a copy of the assistant assessor’s letter of April 20, 2018, containing reference to Selectman Nutter’s wife’s position as one which was believed to have received pay for hours not actually worked.

Even if Nutter were to claim he had never seen the letter before that date, there is a record of him and the other pertinent town officials receiving a copy of it with The Candle’s email of August 6, 2018.

(As written earlier in this article, the assistant assessor and another member of the board reminded Nutter at the June 25, 2018 board of selectmen’s meeting that she had delivered the letter to his town hall in-box on April 20, 2018.)

However, despite receiving a copy of the letter in early August, The Candle has learned officials did not include it in a packet prepared for the executive session held on September 10, 2018 – a meeting held to discuss the assistant assessor’s complaint.

That was a meeting selectman Nutter attended and participated in – despite it being about matters involving his immediate family member.

If the failure to include the April 20, 2018 letter in the packet used by the board for their executive session is used to provide an excuse for Nutter and others to claim they were not aware of the contents, it would not be credible.

Nutter’s general lack of credibility relating to conflict of interest issues will be covered in the next installment to this story.

Next: Massachusetts state law on Self Dealing/Conflict of Interest and Selectman Nutter’s refusal to recuse himself, and his silence about his participation in meetings throughout August and September regarding the assistant assessor’s complaint – including efforts by both Nutter and others to avoid acknowledgement of the April 20, 2018 letter.

In a further installment: What looks like an after-the-fact effort to provide cover for individuals who received payment for hours not actually worked will be explored.

(Click here for link to copy of February 20th Tzanoudakis letter to Bolger.)

(Click here for link to copy of April 20th letter.)

(Click here for a link to the Pepperell Community Media archive video of the BOARD OF SELECTMEN meeting, and further click on the Board of Selectmen Meetings, and June 25, 2018 meeting; at approximately 51:45 minutes through 54:35 minutes into the meeting one can view for themselves the exchange between the two members of the board and Bolger’s contention that Nutter has essentially ignored her complaint.)