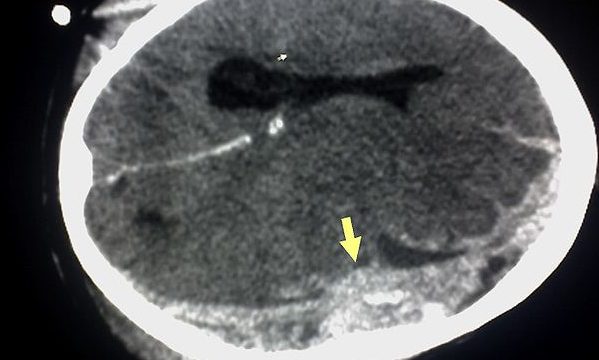 "This CT scan is an example of Subdural hemorrhage caused by trauma."
Home2015 Bill Discussions
Jan 10, 2017 by Bruce Wetherbee -

They say ‘A picture is worth a thousand words.’

The CAT scan photo accompanying this article is not the typical baby photo.

But it is the type of photo doctors and nurses use to detect the damage done to defenseless infants and toddlers injured when adults shake them.

Sadly, those inflicting the damage usually have no idea of the harm they are doing to these kids.

According to the National Institute of Neurological Disorders and Stroke (NINDS):

… a baby has weak neck muscles and a large, heavy head.

Shaking makes the fragile brain bounce back and forth inside the skull and causes bruising, swelling, and bleeding, which can lead to permanent, severe brain damage or death …

Sometimes a parent will shake a crying child out of frustration, when their efforts at consoling the child seem to have failed.

The University of New Mexico Hospital (UNMH) has developed a nationally recognized program for teaching parents the dangers of Shaken Baby Syndrome and how to address their frustration when facing exasperating moments in early childrearing. (Click here for link to UNMH Shaken Baby Syndrome Prevention and Awareness Program.) 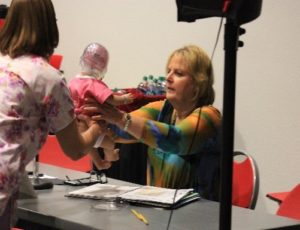 In August of 2015, the New Mexico Legislative Health and Human Services (LH&HS) Committee held an interim meeting in Roswell, and members of the UNMH team of nurses who teach the program made a presentation to legislators using simulation mannequins which light up in the various areas of the brain affected when a baby or toddler are shaken.

Legislators were impressed and  the LH&HS committee endorsed legislation requiring all hospitals to share a UNMH type program with parents of newborns before discharging the mother and child.

The 2016 bill was warmly received by legislators on both sides of the aisle; however it stalled when it became clear the state faced a severe revenue shortfall, and new initiatives were placed on the proverbial back burner.

It was also the year of the biennial when the legislature meets for only thirty days, and has an agenda that is limited to the state budget and matters placed before them by the executive, in what is referred to as the Governor’s call.

This year may be different.

In the weeks ahead another effort will be advanced which would require that hospitals and birthing centers provide training and education to prevent Shaken Baby Syndrome. The training/education would be delivered to every parent of every newborn before discharge from the health facility.

Senate Bill 21 (click here for a link to the bill), has been filed by Senator Michael Padilla (D- Albuquerque). He filed the similar legislation last year, as did Representative Doreen Gallegos (D-Dona Ana) on behalf of the LH&HS Committee.

Given the fiscal crisis facing the state some proponents and advocates hope that when the legislature meets this year they will take a serious look at Senator Padilla’s bill, not only for the obvious safety issues, but also as a cost savings measure.

NINDS reports Children with shaken baby syndrome may require lifelong medical care. These costs are an unnecessary drain on insurance and Medicaid plans, especially when the harm can be prevented.

About a year ago Republican Senator Mark Moores, who was sympathetic to the aims of the 2016 legislation, suggested outside of a meeting of LH&HS committee that insurance companies should step up and cover the costs of this type of legislation, as the preventative efforts would be of great financial benefit to their companies.

Here is a more detailed description of the problems associated with Shaken Baby Syndrome from NINDS, some of which hints at the extensive financial burden associated with treating those harmed:

Shaken baby syndrome is a type of inflicted traumatic brain injury that happens when a baby is violently shaken.

A baby has weak neck muscles and a large, heavy head.

Shaking makes the fragile brain bounce back and forth inside the skull and causes bruising, swelling, and bleeding, which can lead to permanent, severe brain damage or death.

NINDS also states the following as the prognosis related to Shaken Baby Syndrome:

In comparison with accidental traumatic brain injury in infants, shaken baby injuries have a much worse prognosis.

Damage to the retina of the eye can cause blindness.

The majority of infants who survive severe shaking will have some form of neurological or mental disability, such as cerebral palsy or cognitive impairment, which may not be fully apparent before 6 years of age.

(The Candle will be following up this story with interviews with advocates for SB 21, as well as healthcare professionals who have treated and cared for children suffering from Shaken Baby Syndrome. The Candle has also reached out to Senator Padilla for an interview regarding his legislation to get his comments. Legislators are very busy right now, so we hope to hear from him soon to update this report.)