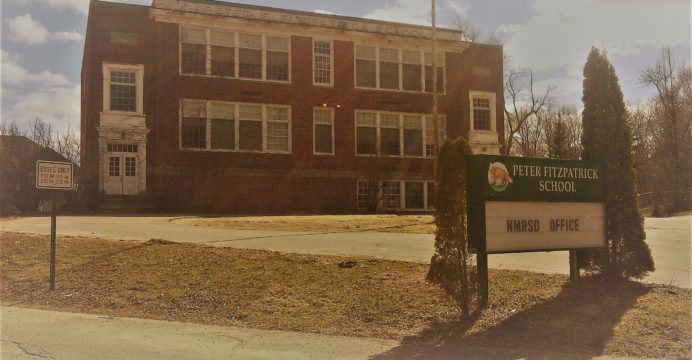 Pepperell – Whoever wins BOS race will have impact on fate of Peter Fitzpatrick School.

This evening, the Town of Pepperell will have a new member of the Board of Selectmen (BOS).

Incumbent Melissa Tzanoudakis, chose not to seek reelection, so either Bill Greathead or Steve Themelis (or a write-in candidate, although none seems to have surfaced) will join Roland Nutter and Lisa Ferolito on the board.

The Candle will report the results of the election later tonight.

While the two candidates expressed differences on a series of issues and style of leadership, both acknowledged the public’s interest in an issue before voters at the May 7, annual Town Meeting – dealing with the fate of soon to be available surplus town property.

Article 15 (click here for link to Town Meeting Warrant), deals with the disposal of town owned surplus land – more specifically, the land and buildings known in town as the Peter Fitzpatrick School.

Because the school system will soon relinquish control of the building complex, the voters, or the Town Administrator according to the Selectmen’s proposed article, will decide the complex’s future, as it becomes an asset without a specific purpose.

The article, supported by two of the current members (Tzanoudakis and Nutter), and opposed by the third member (Ferolito), would “…authorize the Town Administrator to sell …” the buildings and property (with certain options and possible restrictions).

This has raised the antennae of many town residents and generated an ongoing debate on a Pepperell Facebook site.

At last week’s BOS meeting a large number of town residents expressed concern to the BOS about moving ahead with the sale without an extensive feasibility study.

The BOS, when asked why it was in such a rush to sell the property, said it was going to cost the town money to make repairs and mothball the buildings when vacated by the school system.

The town administrator, Mark Andrews, and Selectman Nutter argued that a study had been done, although they eventually conceded that it was not a feasibility study encompassing alternative municipal and community use.

When pressed by those in attendance, both officials described what appeared to be more a real estate sale or market study, developed for the purpose of preparing the property for sale.

(The Candle and residents at the meeting asked that the study Andrews and Nutter spoke of be put up on the Town’s website, but Andrews indicated he would get around to it when he had the time – almost a week later and it has not been posted.)

Several residents suggested ideas for re-purposing the building – including a combination arts and recreation facility; integrating a public safety complex; while some spoke of the need for elderly housing.

It is not clear what will happen regarding Article 15 at the town meeting.

And the composition of the new board of selectmen could result in the BOS offering an amendment of its own, changing the focus from directing the sale of the property to involving more residents in a collaborative process in determining the property’s fate.

Both Themelis and Greathead told The Candle they were impressed by the number of people attending the BOS meeting last week, and the concerns expressed about having more time for the town to study and deliberate.

Regardless which candidate wins tonight, it seems the approach of the BOS could swing towards revisiting a feasibility study, instead of authorizing the Town Administrator to sell it in the not too distant future.

But that also depends on what voters at the annual town meeting decide to do – vote in favor of the article as it stands, amend it, or vote it down and send the issue back to town officials to develop a plan forward – as the town meeting has the final say.

Look here later in the week for a more expansive story about what other towns have done with their surplus school buildings.