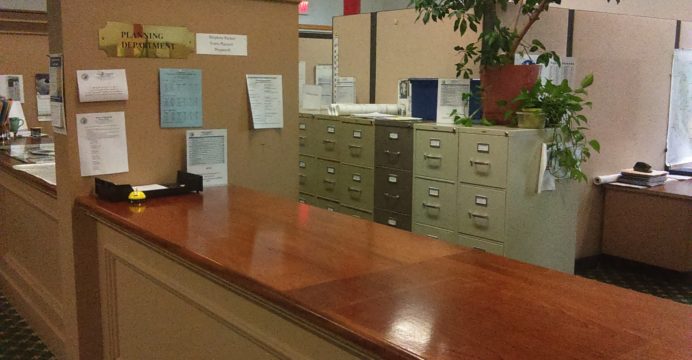 BREAKING NEWS – Pepperell, Massachusetts – Town Planner Steve Parker has submitted his resignation to the Pepperell board of selectmen according to information received by The Candle.

The town planner’s resignation is the second high-profile official to part ways with the town since a recent change in the composition of the board of selectmen (BOS)  – precipitated by the April election of William Greathead, who followed Lisa Ferolito’s upset win over incumbent selectmen Steve Themelis a year ago.

Parker is expected to leave in July, around the same time as the exit of Mark Andrews – the town administrator who announced within days of Greathead’s election that he would retire.

The Candle has been trying to get responses to questions for almost a month from these two employees regarding a controversial proposal to open a gravel pit reclamation project on Nashua road.

Parker’s resignation came shortly after The Candle sent follow-up questions asking why he has not responded to unanswered questions regarding the project.

The town planner was also asked in an email about his responsibility to report to the BOS, and his attendance at their meetings.

The employment contract for town planner states his duties, among other things, “are to coordinate the activities of the Planning Office; and to report to the Town Administrator and the Board of Selectmen on a regularly scheduled basis on the activities of this office.”

According to minutes of the meetings since the summer of 2017, Parker is not listed as attending any of BOS meetings and is only referred to in one statement by Andrews.

The Candle spoke with the planner last Thursday by phone.

Parker stated Andrews told him not to respond to The Candle’s questions, as it was policy instituted by Andrews that all questions would be responded to by Andrews, alone.

The town planner also said he was informed by Andrews that he had responded to the questions.

The Candle received one response to the many questions posed to both Andrews and Parker, which avoided the details of their participation in at least two meetings with the owner and consultant for the project between December 2017 and February 2018.

The reclamation project, if approved, could trigger anywhere from 50,000 to 60,000 trailer truck loads of construction fill (approximately 4 million yards) being hauled into Pepperell over four years.

It was revealed at a recent meeting of the BOS that neither Andrews nor Parker had briefed members of the town’s executive body about the project until questions were raised by Nashua road resident Caroline Ahdab.

Ahdab has been trying since March to get answers and documents from town officials about the project.

She requested communications (including those done by email) initiated or received by town officials regarding the project.

As recently as Monday, she visited town hall to review documents, but has not been provided with any of the communications she sought.

In the one response The Candle received from Andrews about the project, he wrote that at the December 2017 meeting “the property owner met with me and the Town Planner.  At the meeting on December  5, 2017, he discussed his “concept” for the potential development of the property. The Town Planner informed Mr. Burton that the use was not allowed by the town’s zoning by-law.  He was advised to see the Zoning Enforcement Officer.”

There has been no response as to what was discussed with the owner and his consultant at the meeting in February.

While Andrews has claimed the project is a ‘non-starter’ for the town, his assessment dodges the fact of the state being the issuing authority for the permit needed for a large gravel pit reclamation project, not the town.

And the town administrator did not respond to specific questions about the project consultant’s request for a letter of support from the town.

At a May meeting of the BOS, Chairman Roland Nutter stated, to the best of his knowledge, the town has not supplied a letter of recommendation for the project.

The BOS also acknowledged that Andrews and Parker had neglected to inform them of the project until sometime in May. The members of the board stated their deep concern that this type of project would have a negative impact on neighbors and the town’s roads.

Neither Andrews nor Parker answered questions posited to them in several emails about the records they kept of those meetings, why they did not inform the BOS members of the project for five months, and whether or not they informed other town departments of the project, such as public safety officials.

Andrews is reported to have removed his office belongings over the Memorial Day holiday weekend, including his town supplied computer and phone.