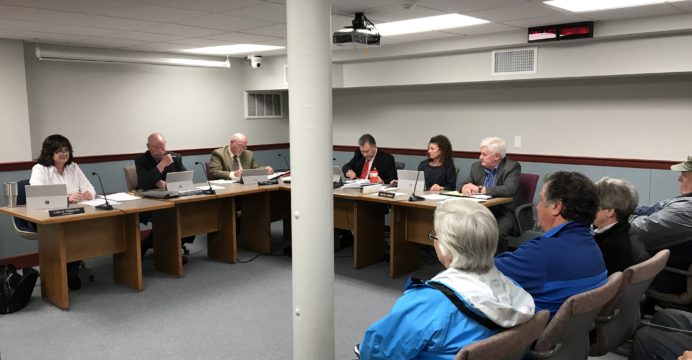 Pepperell Board of Selectmen, l to r Lisa Ferolito, Bill Greathead, and Roland Nutter.
HomeCurrent News
May 1, 2018 by Bruce Wetherbee -

Acting chair of the BOS Roland Nutter and member Lisa Ferolito welcomed newly elected board member Bill Greathead to the board.

After a discussion about providing more openness in the way people are received at BOS meetings, and assuring that all BOS members will have a role in putting items on the BOS agendas, Ferolito and Greathead agreed to appoint Nutter to be chair of the board for the next year.

They then got right to business dealing with routine action on weekly warrant items.

At the end of the warrant review, town administrator Mark Andrews submitted a memorandum to the members of the BOS advising them that he has processed his “retirement with the Middlesex County Retirement System” and thanked the BOS “for the opportunity to serve the residents of the Town of Pepperell.”

While the actual date of his leaving town service is not yet determined, it is likely to be in mid-summer.

Andrews gave no reason in the memorandum why he applied for his retirement at this time.

But given the changes to membership on the board, after last year’s election of write-in candidate Ferolito, and last week’s overwhelming victory of Bill Greathead, Andrews was expected to be in for a rough ride.

Andrews’ management style has been the subject of rumors about favoritism toward certain town employees and earned him significant distrust from a number of residents.

While producing an overall better fiscal position for town finances, many had expressed displeasure with the degree of decision-making handed to Andrews by previous boards of selectmen – and his arbitrariness in matters residents felt needed a more inclusive, collaborative approach.

During the past year Ferolito found herself at odds with members Nutter and Melissa Tzanoudakis (who did not seek re-election and was replaced by Greathead) as she challenged Andrews’ control.

Residents have also been critical of what they described as diminished transparency in town government affairs under Andrews’ management.

The circumstances surrounding Article 15 of the annual town meeting warrant is an example of the concern many had with Andrews’ tenure.

As recently reported in The Candle, Article 15 would authorize the Town Administrator to sell the buildings and property known as the Peter Fitzpatrick School.

Many residents showed up at the previous two BOS meetings concerned about the sale of that property without a feasibility study being done.

Before her departure from the board, Tzanoudakis, along with Nutter and Andrews, provided nebulous explanations regarding the effect of the language used in Article 15.

Richardson argued that the language in Article 15 really did not give Andrews the power to sell the property if it was approved at town meeting, because the town would have to vote to do that later.

But Ferolito objected to that interpretation, and asked Richardson to read the first sentence of the article which states:

Richardson apologized after reading the sentence, and then agreed with Ferolito that, if passed, then the town would have voted to give Andrews the power to sell the property.

Several residents in attendance expressed their desire that the town not take any steps to sell the property until a thorough feasibility study was conducted which would include participation of residents and not just town officials.

Nutter then accepted a motion to pass over the article at town meeting, with the board voting unanimously to do so.

The BOS explained their  vote would end any effort to authorize the sale of the property at the town meeting next Monday.

BOS members also stated they would look to appoint a feasibility study committee for the future of the school property and will open the process for discussion with residents at an upcoming meeting.

In another matter regarding public participation, the BOS was asked by resident Tony Beattie if they would appoint additional members to the Pepperell Master Plan Committee (MPC).

Beattie and other members of the audience reminded the BOS that the MPC was composed of a large majority of people connected with the business community and needed a more diverse membership – including adding more women, and other advocates of community needs to the committee.

Ferolito and Greathead stated support for more people being appointed, while Nutter wanted feedback from the people he and the previous BOS had already appointed to the MPC before appointing other members.

Nutter’s position was not supported by the majority of people in the audience.

It was agreed that this matter would be taken up at the BOS meeting later in May.

The issue of diversity of gender and experience/interests of the members of the MPC is on the agenda of the next MPC meeting to be held on May 10, 2018, at the library.

(Click here to read The Candle article regarding residents’ objections to the current composition of the Master Plan Committee.)