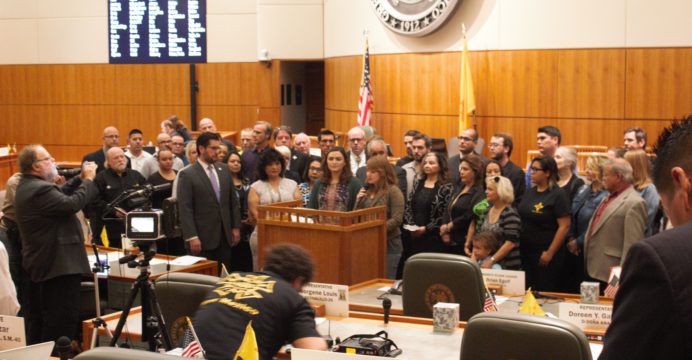 Empty promises? So far, no evidence to the contrary.

So another revenue reform proposal from the Republicans has been advanced through the media, and still nothing but rumors from the Democratic leadership as to what will be contained in their revenue reform package.

According to a story by Bruce Krasnow in the Santa Fe New Mexican (click here for link to New Mexican story) , Senator Ron Griggs “a Republican who is the former mayor of Alamogordo, calls the omnibus tax bill he is sponsoring the start of that conversation. The bill not only brings back the gross receipts tax on food and medicine — albeit at a lower rate — but it raises the fee to transfer ownership of a motor vehicle and imposes a new fee to transfer or refinance real estate.”

Progressive advocates and politicos are getting nervous and downright annoyed that Democrats are allowing the Republicans to steer the narrative on revenue reform and fixing the state budget fairly – not on the backs of the most vulnerable.

They are concerned that the Democratic leaders offer a lot of promises, but as yet no real action that defines them as advocates for the needs of the traditional base of the Democratic party.

A few days before the session started in mid-January, the House leadership stated they had a plan to immediately advance a solvency package to deal with the failure of the legislature last year to balance a budget. Their solution was more sweeps and cuts to education and state services.

Then, according to the Democrats’ plan, they were going to develop the budget for FY 2018, which begins in July of 2017, and get it to the governor quickly and with a revenue package so the legislature would have time to respond to any vetoes before the sixty-day session expired.

But The Candle’s sources indicate Democratic leaders can’t get their members corralled to pass a significant revenue package, one that would address the promises they made to their base to dramatically save a state falling deeper into fiscal and psychological depression.

The NM House Dems, as they refer to themselves (though they are officially listed on their emails as the NMHDCC) were persistent in advocating for taking over leadership of the House from the Republicans during the election last year.

They wrote in an email to progressives back around the time of the fall 2016, Special Session seeking support:

“In case you missed it, here’s an update on the Special Session from this morning’s Santa Fe New Mexican…

“House Republicans have rejected a proposal narrowly passed by the Senate on Friday to delay implementation of corporate income tax reductions. But rebuffing the proposal and holding the party line against raising taxes meant House Republicans had to look elsewhere for additional savings.

“If you haven’t already, will you take a moment to sign our petition calling on House Republicans to support the Senate bipartisan plan?”

The people of New Mexico responded in November, and gave control of the House back to the Democrats and increased their numbers in the Senate, which they have controlled for decades.

After a whirlwind tour of the state before the legislative session began, the new Speaker of the House and his colleagues announced they had a plan.

But if you pull any five progressive advocates into a corner where they won’t be overheard by the Democrats (pssst– they don’t want to hurt their cause by pissing off these guys), at least three out of five express dismay, frustration, and disbelief that the new leaders could be so adrift in a sea of indecision.

One very experienced, and well known state house politico, and supporter of progressive causes, who would never utter a misplaced word about the people on his side of the issues, distanced himself from the House leadership, dumbfounded that they had not advanced – right out of the gate – a serious revenue package and budget that reflected the principles of the Democratic party.

Another experienced and well respected advocate when asked about the performance of the leadership in the House so far, responded, “What leadership?”

The best The Candle has been able to get from legislators in individual discussion, is that “they are working on it (a plan for revenue).”

But it seems that a handful of the Democrats that were re-elected are the ones holding back on offering a serious and bold revenue and economic development package, to the frustration of some of the newer members.

And this recalcitrance of the few seems to be playing into the hands of the Republican House members and the Governor.

As Joe Monahan reported today in his widely read daily political report (click here for link to New Mexico Politics with Joe Monahan), one of his sources close to the action at the Roundhouse, recently commented:

“House Speaker Brian Egolf and Senate Majority Leader Peter Wirth and their associated committee chairs have to learn to flex their muscle. If they don’t want to be in power and control this session I’m sure Republican Rep. Nate Gentry and his ilk would gladly take over.”

To most observers The Candle has spoken with, it seems that prediction has already materialized by default – and they believe the official evidence will be the announcement of a very unimaginative and deficient revenue package and even more austere budget that will hurt the very people the backs on whom the Democratic leaders rode to power.