(This is the first in a series about the need for New Mexico political leaders to stop sticking their heads in the sand and come up with a plan for 21st  Century solutions for job creation, poverty, education, equality and hope.)

Maybe NM State Land Commish is missing the irony in his placing a solar panel alongside his beloved oil rig?

In an article (Monday, October 5, 2015 ) which appeared in the Santa Fe New Mexican, journalist Justin Horwath wrote about a speech made by State Land Commissioner Aubrey Dunn to  the New Mexico Oil and Gas Association’s annual gathering in Santa Fe. (Horwath appears to be the only reporter who covered this speech.)

Near the end of the article Dunn appears to be bragging to his oil and gas audience how he is showing the tree huggers a thing or two. As Horwath wrote:

“…Dunn told industry members that shortly after he took over, he installed a pump jack in the front of the Land Office building on Old Santa Fe Trail as a tribute to the revenue their industry generates.

“But Dunn’s biggest applause line from Monday’s audience came when he said it is good that the pump jack is powered by solar, “because everybody gets to see when it’s cloudy or the sun’s not shining” that there is no power.” 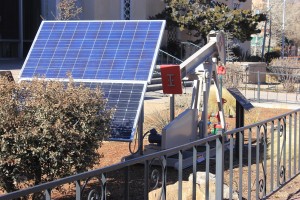 It’s kind of obvious Dunn needs to bone up a little on renewable energy and learn about batteries … or maybe he just couldn’t help hamming it up for his good ole boys.

But seemingly lost on Dunn is the message nature has provided him if he just takes a walk outside in the mid afternoon to view the oil rig he placed in front of his offices to demonstrate his undying commitment to dirty energy: in the picture to the left the shadow cast by the solar panel over the oil rig is prophetic of the Oil & Gas industries finding themselves in the shadow of burgeoning renewables.

Yes the sun is slowly setting on oil & gas being the primary suppliers of energy for the transportation, manufacturing, and heating needs of our new world.

What Dunn, his buddies in Oil & Gas, and their supporters at the Roundhouse don’t seem to get is that not only is the world changing, so is the world’s economy.  Energy will always be a major component of economic growth and stability. But just as the gas lamp gave way to the electric lamp, just as the steam engine gave way to engines powered by petroleum, so also will gas & oil and other dirty energy give way to more easily renewable and cleaner sources of energy.

Other Political Leaders get it: the world economy is demanding more than ‘drill baby drill.’

It did not go unnoticed that President Obama in his last State of the Union Address, referred to the changing landscape of energy production. He also made the case for embracing the change; he outlined how in the past as a nation we succeeded being the leading edge of change; as well as the consequences to our country by not adapting to the way the world will grow its economies.

Here is the part of the President’s speech that should garner the attention of the investors and owners of dirty energy, and encourage them to seriously look to invest the financial resources they have in the future, before they have squandered them:

“Look, if anybody still wants to dispute the science around climate change, have at it. You will be pretty lonely, because you’ll be debating our military, most of America’s business leaders, the majority of the American people, almost the entire scientific community, and 200 nations around the world who agree it’s a problem and intend to solve it. (Applause.)

“But even if — even if the planet wasn’t at stake, even if 2014 wasn’t the warmest year on record — until 2015 turned out to be even hotter — why would we want to pass up the chance for American businesses to produce and sell the energy of the future?

“Listen, seven years ago, we made the single biggest investment in clean energy in our history. Here are the results. In fields from Iowa to Texas, wind power is now cheaper than dirtier, conventional power. On rooftops from Arizona to New York, solar is saving Americans tens of millions of dollars a year on their energy bills, and employs more Americans than coal — in jobs that pay better than average. We’re taking steps to give homeowners the freedom to generate and store their own energy — something, by the way, that environmentalists and Tea Partiers have teamed up to support. And meanwhile, we’ve cut our imports of foreign oil by nearly 60 percent, and cut carbon pollution more than any other country on Earth. (Applause.)

“Gas under two bucks a gallon ain’t bad, either. (Applause.)

“Now we’ve got to accelerate the transition away from old, dirtier energy sources. Rather than subsidize the past, we should invest in the future — especially in communities that rely on fossil fuels. We do them no favor when we don’t show them where the trends are going. That’s why I’m going to push to change the way we manage our oil and coal resources, so that they better reflect the costs they impose on taxpayers and our planet. And that way, we put money back into those communities, and put tens of thousands of Americans to work building a 21st century transportation system. (Applause.)

“Now, none of this is going to happen overnight. And, yes, there are plenty of entrenched interests who want to protect the status quo. But the jobs we’ll create, the money we’ll save, the planet we’ll preserve — that is the kind of future our kids and our grandkids deserve. And it’s within our grasp.

“Climate change is just one of many issues where our security is linked to the rest of the world.”

Let’s be clear, the extracting industries will have a place in an evolving economy. But it will more likely be a niche in the markets of suppliers for manufacturing needs (more likely actual component elements of the products, and less part of the energy needed to produce them).

Innovative extractors will continue to figure out a return on their investment; but the economic dynamic will be much different than those currently associated with energy production and the previously lower cost associated with drilling and sucking versus the profit on a barrel of oil.

It also appears the writing on the wall is being read by some in the extracting industry who are simply converting their rigs and pipes to exploit another important resource … one more vital to life itself on this planet: WATER.

An October 2010 Newsweek article entitled “The Race to Buy Up the World’s Water” states:

“Unlike the villain in James Bond’s Quantum of Solace who hatched a secret plot to monopolize Bolivia’s fresh-water supply, the real water barons cannot be reduced to a simple archetype. They include a diverse array of buyers and sellers—from multinational water giants like Suez and Veolia that together deliver water to some 260 million taps around the world, to wildcatter oil converts like T. Boone Pickens who wants to sell the water under his Texas Panhandle ranch to thirsty cities like Dallas.” (Emphasis added.)

But that’s a story for another article.

So getting back to Aubrey Dunn … and other elected officials.

Dunn is a state official. Elected by the people of New Mexico to be a good steward of the resources the public collectively owns. New Mexico’s future is significantly in the hands of Dunn, other bureaucrats, and legislators.

The problem for New Mexico is these leaders all seem to be taking us down the same road.  A road which ends disastrously with our social fabric unraveling as it hits bottom.

Revenues from the extracting industries in New Mexico are are sinking at a rate that mirrors the rising temperature problems facing our planet.

The collective and myopic view of politicians like Dunn that the extraction businesses of New Mexico are the most important source of revenue for the people of New Mexico will soon morally and fiscally bankrupt New Mexico state government.

Their brains are suffering a seizure – they are stuck on the concept that because over the past hundred years extraction has been New Mexico’s equivalent of the Goose with the Golden Eggs, it will continue once we get into another boom cycle.

And what is their solution to jump start us to another questionable boom:

Aubrey Dunn and the likes of him need to realize New Mexico’s resources are not theirs alone to distribute cheaply to the guys who wine and dine them.

The future belongs to all its residents. And although these special interest folks are seemingly a lot smarter and craftier than most of the current lot of elected officials, the people know what is happening – they can feel it in their bones – and they are getting upset.

What state government officials have yet to notice is that not only is the fat lady singing, she has eaten all the eggs, and is now eyeing the goose.

Look for Part Two – New Mexico needs to invest in her own future, because the oil and gas guys are going to take their money and run.