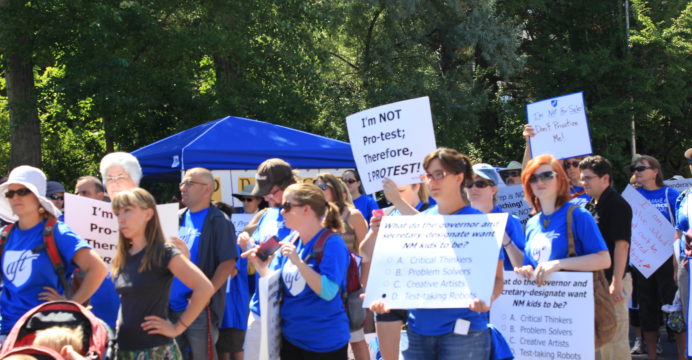 Republican Leader: Teachers Do Not Have Students’ Interests at Heart. AFT President Fires Back.

The debate regarding a controversial teacher and principal evaluation system for New Mexico’s schools has been a mainstay in the legislature since the 2012 thirty-day session when Governor Martinez placed it on her call of matters to address besides the budget. The program has never won legislative approval – but it’s been implemented anyways, over strong objections form educators.

Thursday night the House once again expressed its disapproval of the evaluation system, passing a bill which would, among other things, review the administratively implemented pet project of the governor’s education boss.

While the debate has always been fairly heated, this time the Republican Leader of the House, Nate Gentry (R-Albuquerque), went even further than in previous years with criticism of teachers across New Mexico by stating they “do not have the students’ interests at heart.”

Stephanie Ly, President of the American Federation of Teachers – NM.

That drew this immediate response from Stephanie Ly, President of the American Federation of Teachers (AFT) for New Mexico, who told The Candle “It is extremely disappointing and discouraging that Rep. Gentry would question the commitment of New Mexico’s public educators to their students.  I can say with certainty that students are the number one concern each and every day that an educator enters their classroom or school.”

The bill was filed by Majority Whip Sheryl Williams Stapleton (D-Albuquerque), an educator, and critic of the system advanced by Governor Martinez’s Education Secretary Hanna Skandera.

HB 125, is an act which would establish a body composed of educational stakeholders to review the teacher and principal evaluation system.

The current system rolled out by Skandera is heavily influenced and developed by, and reliant upon, out of state corporate education advocates.

Despite her teacher evaluation system being rejected by the legislature in 2012, Skandera moved ahead using a questionable regulatory approach, spending tens of millions of dollars (much of it hidden from easy view by the public).

And in addition to the annual battle in the legislature, Skandera’s system has been challenged in court, where (despite the litigation being far from resolved) it has experienced setbacks in court rulings to date. 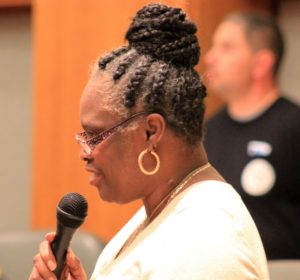 (Click here for The Candle article in December of 2016 regarding NM Public Education Department’s obscure contracting process spending of millions of the state’s dollars being directed to out of state corporations for the controversial evaluation program.)

The debate ensued immediately after the Majority Leader explained the bill (click here for link to bill information from the legislature’s website), with several Republicans defending the Secretary’s evaluation system, and claiming kids would continue to do poorly in school without the teacher evaluation system designed by Skandera’s supporting cast of advisors.

They claimed the measure being advanced by the Majority Leader was unnecessary, and that she and her allies should back off and allow Skandera’s plan to continue.

But Williams Stapleton, in a long session of back and forth questioning by Republicans, held her own, citing criticism of the Skandera evaluation system form teachers, administrators and parents. 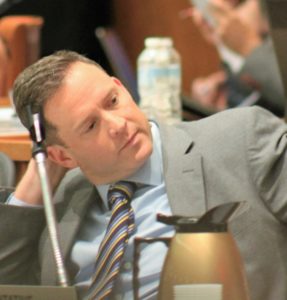 That sent Gentry off as he tried defending Skandera and her plan, and in the process denigrated teachers as a group. Here is a transcription of some of his comments during the debate:

“Now I think we are very fortunate to have experts in education in this room, we have superintendents, school officials, teachers on both sides of the aisle.

“But the question is, and it was made clear during the other day in the House Judiciary Committee, that the folks who are some of the biggest contributors in this body, do not have the students’ interests at heart. They do not. And that shows, because we have just abhorrent performance numbers.

“And so I hope that at some time, at some point we get serious about education in this building, that we pass reforms that are meaningful, that will improve these numbers.”

Williams Stapleton reminded Gentry and the Republican opposition that Skandera’s evaluation system has been in place for the last five years.

She contended that evaluation system was a big part of the problem.

In the end HB 125, passed the House pretty much along party line voting.