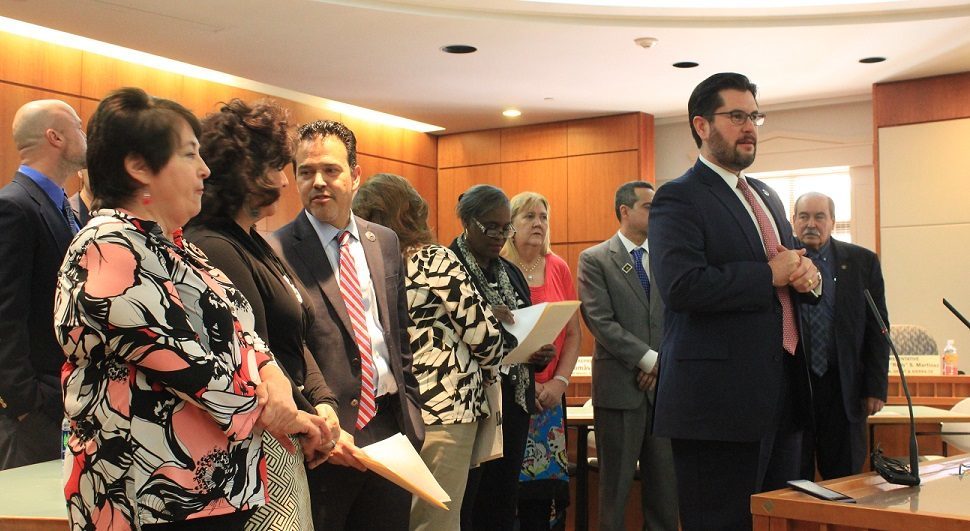 On Thursday afternoon, Democrats in the New Mexico House of Representatives, revealed just how desperately anemic current finances of the state are, as lawmakers try to craft a budget without more cuts.

Newly appointed House Appropriation and Finance Committee, Patti Lundstrom summed it up in one phrase: “we have a big hole to fill.”

In response to updated revenue forecasts from the administration and the Legislative Finance Committee predicting stabilization, with a possible slight uptick, of revenues, legislators determined new sources of income were needed to get the state from behind the eight ball.

Speaker of the House Brian Egolf, along with his leadership team , Representatives Lundstrom, Carl Trujillo (acting Chair of the Taxation Committee), and Sheryl Williams Stapleton (Majority Leader), said they would present a budget alongside “common  sense tax reform.”

Lundstrom pointed to the solvency effort to fix the FY 2017 budget, the consensus revenue report, and low state budget reserves – the state had 1.6% in reserves – as reasons for a new approach.

“In other words we’re flat from what was presented in December 2016 … nothing that we can count on as a major revenue boost for this remaining budget process,” stated Lundstrom.

The Chair of the committee continued, “Without new revenue, we’re looking at additional 2% to 3% to 4% cuts across the board. We’re looking at not building our reserves to the 5% level that we need” to protect bond ratings for the state, which have already been lowered by bond rating services from triple A to double A plus.

“We also learned recently from Higher Ed … that without a strong base for their cash balances and a strong operating budget they can lose accreditation … I was shocked, I did not know that was a potential reality for them. That’s quite a big deal for us,” Lundstrom added.

This would be a new blow to New Mexico students already facing an uphill struggle seeking jobs when they graduate.

The Democrats then offered their initial plan for revenue development which is listed below:

Local Business Fairness Provision – Closes a loophole that exempts internet and catalogue vendors without a physical presence in the state from paying GRT. This updates our tax system to reﬂect the 21st Century economy.  It would generate: $20 million for FY18 and $20 million for FY19.

Level the Playing Field on Health Care Taxes – Corrects a decades old inequity in which differing levels of tax are imposed for the same services depending on the insurance status of the patient or the tax classiﬁcation of the hospital or clinic. Closes a loophole by changing existing medical deductions and credits to a uniform deduction for all providers. It would generate: $68 million for FY18 and $65 million for FY19.

Heavy Truck Permit Fee – Imposes a new $90 permit tax on vehicles subject to the weight distance permit. This is an innovative outside-the-box way to add signiﬁcant revenue without impacting NM families. It would generate: $63 million for FY18 and $63 million for FY19.

The Candle will update this story later today.