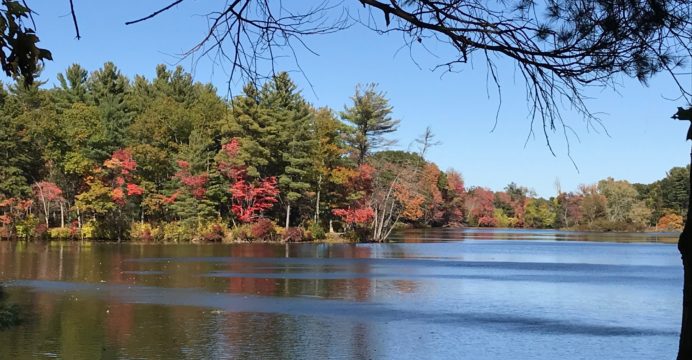 The Nashua River Watershed Association has raised serious concerns about a proposed construction fill dump-site in Pepperell, and has asked the state to reject the proposal.

On August 14, 3018, the Nashua River Watershed Association (NRWA) wrote to the Massachusetts Department of Environmental Protection (DEP) urging the disapproval of a plan to dump as many as 50,000 trailer truckloads of fill from construction sites in New England at a site adjacent to the Nashua River.

In its letter detailing the need to protect the river and local water supplies the river advocacy organization wrote:

“The NRWA has grave concerns that the project threatens these resources. NRWA urges MassDEP to reject this project proposal.”

The NRWA has led the way for more than five decades in rescuing the Nashua River from a century of abuse by polluters – and keeping it a clean waterway for generations to come.

Recently the river organization helped eleven communities (nine in Massachusetts and two in New Hampshire) join in asking Congress to designate the Nashua River, and tributary Squannacook and Nissitissit rivers, as Partnership Wild and Scenic Rivers.

“… The project site is in close proximity to the Nashua River, and has soils that are largely comprised of sands and gravels that support high groundwater flow velocities. There is likely a direct hydrologic connection between the site and the Nashua River. Additionally, a portion of the site is within the Zone II Nashua Well water supply for the Town of Pepperell. Contaminants potentially leaching from the fill material would flow rapidly and threaten the Nashua River and Pepperell water supplies …”

Local residents have been organizing for a meeting hosted by the Pepperell board of selectmen tomorrow evening (Monday, August 20, 2018), which will begin at 7:15 PM, in the Pepperell Senior Center located at 37 Nashua Road.

At this meeting proponents are scheduled to make more details available as to what they want to do at the site, and how they would mitigate any associated problems.

Members of the public will also have time to express their concerns and comments.

Caroline Ahdab, who’s dogged efforts to extract information from previous town officials about the project finally forced the board of selectmen into action, felt the NRWAs letter fit the narrative of concern advanced by area residents.

This is “a very strong statement from a well-respected organization,” Ahdab stated in an interview with The Candle.

“Many people have worked hard to bring the Nashua River back from the dead.  I expect the Massachusetts Department of Environmental “Protection” to protect the people, the wildlife, the environment and the Nashua River, and doesn’t set us back 50 years,” Ahdab added.

Margaret Scarsdale, another organizer with the community group, told The Candle, “The objections raised by the Nashua River Watershed echo the concerns of many citizens of Pepperell and our neighboring communities, chief among these concerns is the insufficient protocols to accurately analyze what exactly is in the “clean” fill that is “reclaiming” the land.”

The problems other Massachusetts communities, such as Uxbridge, are enduring from similar dumping projects have been a focus of Pepperell residents as they ask officials to oppose the Nashua road proposal.

“The evidence is irrefutable for Uxbridge and Rutland that the materials deposited in their town was, indeed, toxic, and Pepperell is vehemently opposed to having our environment irrevocably tainted. We stand for clean water, clean air, and a clean community in which to live and raise our families,” concluded Scarsdale.

The state agency has responded to the project’s owners with its own concerns.

In a letter dated July 27, 2018, the DEP wrote to Mass Composting Group, Inc., the company seeking a permit – known as an administrative consent order (ACO) – from the state to dump the material from at the Nashua road site of a former gravel pit:

“… In accordance with Policy #COMM-15-01, submittal of documentation demonstrating that the appropriate municipal officials are aware of the project and have been afforded the opportunity for meaningful input is required. MassDEP will not finalize an ACO for the proposed reclamation project unless and until all comments from appropriate local officials on project noise, dust, odor and/or trucks have been adequately addressed. The SMP [soil management plan] should also include a plan for communicating with the public and involving interested parties at key points in the implementation of the Project.”

DEP also issued a seven-page memorandum identifying more than thirty deficiencies and concerns about the initial application from the proponents for a permit.

A PDF of the letter and the memorandum can be seen by clicking here.