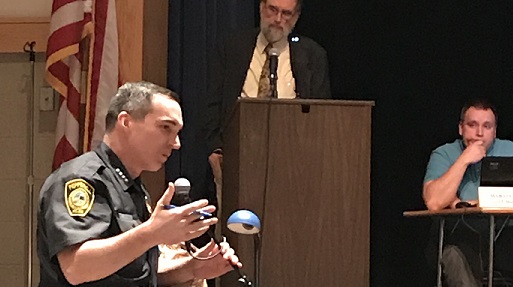 Several other articles were also acted on, including three offered by residents.

Caroline Ahdab’s citizen petition to appropriate $400,000 to purchase a ladder truck for the fire department was approved after a debate, during which the fire chief stated his department has been without one for several years.

Chief Toby Tyler explained his department would purchase a re-equipped used vehicle which would provide service for about 10-12 years.

Tyler also suggested not having a ladder truck might trigger an increase in Pepperell house insurance rates when rating organizations review the town’s fire protection equipment in the near future.

In another public safety related citizen’s petition, resident Crystal Jefferies amended her original request for two new police officers, as an additional one had been added in the budget by the board of selectmen (BOS) and finance committee (FINCOM).

She pointed out, however, that the new position was not funded for the entire fiscal year.

Wanting the new position to start in July instead of October, Jefferies revised her article to appropriate approximately $25,000, in a one-time deduction from free cash.

Police chief David Scott described the need for additional officers, and while he had hoped the FINCOM would have agreed with his recommendation for two new officers, suggested the one new position was a step in the right direction.

After considerable debate of Jefferies article, as amended, was approved.

The town meeting unanimously approved a motion from town conservation administrator Paula Terrasi to accept the Nashua, Squannacook, and Nissitissit Rivers Stewardship Plan which asks a Wild and Scenic River designation for the rivers be issued by the federal government.

In other matters the town meeting rejected a citizen petition from Timothy Aalerud which asked the town to change the zoning for a property he purchased from the town.

The land is zoned for residential use, not the commercial use he thought existed from the description the town included in advertising it for sale.

A neighbor opposed the change and suggested the land court, where there is a current case, was the proper venue for resolving the issue.

The BOS sponsored a measure seeking to place the question of prohibiting marijuana establishments from operating in Pepperell on the ballot of an upcoming election. It was also approved by the town meeting.

Note – The Candle will be reporting on several issues raised during the town meeting debate on general government and school budgets in the next few days.